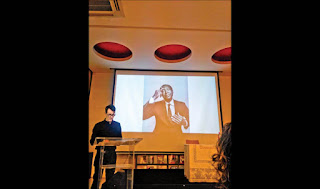 Nigerian curator Okwui Enwezor, who passed away on 15 March at age 55, was one of the most influential figures in the international art circuit and yet he dedicated his life to supporting artists from marginalised cultures, writes Bhumika Popli.

Nigerian curator Okwui Enwezor, who died on 15 March 2019, at age 55, will always be remembered for the radical language he provided to the arts. The exhibitions he curated and the critical essays he wrote will for years to come serve as a source of inspiration for those looking to make their way in the creative arts.

In 1996, he curated In/Sight: African Photographers, 1940 to the Present, an exhibition on African photography hosted by the Guggenheim Museum in New York. The show was a conscious attempt on the part of the curator to divert attention from the mainstream to the marginalised expressions of African culture.

This show included 30 photographers and presented to the world many visions of Africa, with photos themed on the continent’s political, architectural and social fabrics.

At just 38, Enwezor became the first non-European person to become the artistic director of Documenta11 (1998-2002), a well-regarded international exhibition that takes place every five years in Kassel, Germany. This 100-day-long art show included exhibits about marginal and postcolonial lives. His mission statement, as Enwezor had written, was to facilitate “the full emergence of the margin at the centre”.

When he curated the 56th Venice Biennale in 2015, he became the first director from the African region to be on the board of the Biennale. The theme of this prestigious event was “All the World’s Futures” and it featured artworks by 135 artists from 53 countries. Alexander Forbes in his review of the Biennale in Artsy, an online magazine, called it an “unpleasant experience”, but unpleasant in a good way.

Forbes wrote, “Enwezor uses a vast series of case studies to highlight the negative conditions and overwhelming precarity created by our late-capitalist society rather than setting up a series grande and prescriptive conceptual projects.”

Enwezor also cofounded Nka: Journal of Contemporary African Art. The word “Nka” comes from an ethnic Nigerian language, Igbo. It means, as he mentioned in an interview, art, and also refers to phrases like “to create, “to make”.

Enwezor was born in Nigeria and lived in New York and Munich. He studied political science in the US and was also keenly interested in poetry. He worked as an educator, served as the director of Haus der Kunst, Munich, and was appointed as the adjunct curator of International Centre of Photography in New York, along with being the visiting professor of art history at many universities and colleges.

Enwezor was also regarded with great reverence in the Indian art community. On 3 April, there was a remembrance meet in his honour in Delhi.

The event was attended by artists Vivan Sundaram and Amar Kanwar among others.

Gayatri Sinha, an art curator, was also present here. She said that Enwezor saw the Nigerian African identity as a productive site and demanded its full inclusion into the global system of arts.

Vivan Sundaram, who had a long association with Enwezor, said that the curator raised tough questions about politics throughout his career. “Enwezor tried to rescue justice and history from instrumental abuse,” Sundaram said. He then quoted from a letter Enwezor once wrote to him, “…the fact that you have sustained a critical, ethical and material enquiry in your art over many decades in the current crisis of the global sphere…the exhibition becomes more dynamic.”

Amar Kanwar, a multimedia artist from Delhi, worked with Enwezor on the Documenta11. At the event, Kanwar said that the curator always pushed him to believe in his work.

Art critic Geeta Kapur also gave Enwezor a heartwarming tribute, talking about the “deep grief” Enwezor’s death had caused her. “Okwui occupied all the worlds that art aspires to,” she said, referring to the contributions the late curator made to the art sphere.

Enwezor was called a “trailblazer”, “intellectual visionary”, “reformist”, and many more things. Rajeev Lochan, former director of the National Gallery of Modern Art, Delhi, also knew Enwezor. Lochan got curious about the meaning of Enwezor’s name did some research on it. He said, “It meant practicality, ambition, success, and all such virtues,”— qualities so intrinsic to Enwezor’s character.
Art Culture Essay Igbo Literature Okwuii Enwezor