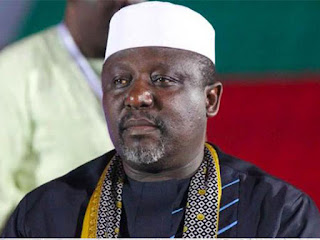 Ohanaeze Ndigbo Worldwide has dissociated itself from a call on the Independent National Electoral Commission (INEC) to release the certificate of return to Imo State Governor, Rochas Okorocha.

President of the Federal Capital Territory (FCT) chapter of the body, Odozi Nwodozi, had, in a statement on Wednesday, alleged that the leadership of the ruling All Progressives Congress (APC) collaborated with INEC and denied “Okorocha and Senator Benjamin Uwajimogu” their certificates just to cripple the Igbo attempt at a shot in the leadership of the ninth National Assembly.

President General of the apex Igbo organisation, Chief Nnia Nwodo, yesterday, warned presidents of its chapters to desist from issuing statements without clearance.

He disclosed that the Ohanaeze Lagos State was being investigated for some pronouncements credited to it.

A statement by the Special Adviser to the President General on Media and Publicity, Emeka Attamah, said while Ohanaeze Ndigbo will always speak out on matters concerning Ndigbo generally, it will not allow itself to be dragged into partisan politics concerning individuals.

“Ohanaeze Ndigbo frowns seriously at the tendency of some of its officials or mischievous elements using the name of the body to issue unwarranted statements purporting them to emerge from the apex Igbo cultural organisation.

“Ohanaeze Ndigbo is at the moment looking into a statement credited to its Lagos State chapter president and will not hesitate to discipline any state president or official, who issues any statement without authorisation,” Attamah stated.

When contacted, Nwodozi said his statement was not intended to embarrass the organisation but aimed at drawing attention to the APC’s exclusion of the Igbo from national polity, including the leadership of the National Assembly.

Meanwhile, governorship candidate of the Action Alliance (AA) in Imo State,Uche Nwosu has blamed the ad hoc staff engaged by the Independent National Electoral Commission (INEC) for the dismal performance witnessed in some parts of the country, including his state during the 2019 general elections.

Nwosu, who reacted to the vote of confidence passed on INEC by 75 political parties on the conduct of the 2019 elections,while addressing newsmen in Owerri yesterday, agreed with the parties stand, but differed with the type of staff engaged by the commission.

While describing the single act by INEC to engage the university dons as the greatest mistake made by the commission, he advised against the use of ad hoc staff in future elections.

He said: “One of the best ways to strengthen the electoral system is for the commission to permanently do away with auxiliary staff and recruit more Staff instead.”

Further buttressing his stand Nwosu said: “I want to advise INEC to stop making use of ad hoc staff. These ad hoc staff were the ones who compromised the last elections.”