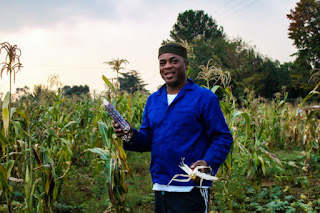 GUATENG, SOUTH AFRICA (FOOD FOR MZANSI) -- Edward Wisdom (48) is originally from the southeast of Nigeria. Since coming to South Africa in 1994 he has carved out a niche for himself in business and agriculture, producing and selling produce that other African immigrants and expats struggle to find in Mzansi.

Those who affectionately know Wisdom call him Green Fingers “because everything I put on the ground grows well.” He is an Igbo, hailing from a line of subsistence farmers, their staples being yams, cassava and taro.

In 1996, Wisdom opened a shop in Braamfontein, making him one of the first Nigerian shop owners in Johannesburg. In 2011, almost fifteen years later, he obtained a 3.5-hectare piece of land in Vanderbijlpark, an industrial town on the Vaal River in the south of Gauteng province.

This made him the first Nigerian commercial farmer around Johannesburg. “I realised that most of the Africans in South Africa were importing a lot of their food. I saw a gap in garri [the powder of cassava] and bitter leaf plant. These two are the major things West Africans import more than anything else,” he claims. However, the staples are still not easily available in South Africa. Millions of rands are spent every month on importing the staples. Noticing this gap, Wisdom says he decided to capitalize on it.
West African vegetables

Now this father of five mainly grows highly medicinal West African crops such as bitter leaf (an indigenous tropical African plant known for treating malaria, tuberculosis, kidney diseases and others) and okra (a plant known for reducing cholesterol levels) as well as basil, butternut, tomatoes and brinjal. He sells his produce under the brand “Uncle Wiz”.


WISDOM SAYS ALTHOUGH IT’S HARD TAKING “THE ROAD LESS TRAVELLED”, SUCH RISKS CAN BE QUITE REWARDING.

“There is a lot of competition in the South African food markets and there is no market for small-scale farmers. Agriculture is a numbers game. Without big land you can’t feed a lot of people. I decided to go where there’s less competition, but high demand,” he tells me.

Additionally, Wisdom says, part of the reason why he produces these vegetables is to preserve the Igbo history. Millions of people died of starvation in the late 1960s when a short-lived country called Biafra seceded from Nigeria, leading to a three-year-long civil war and a blockade of the predominantly Igbo area.

Wisdom recalls: “When I took these seeds… my intentions were to keep them as a seed bank for our children so that they would know our crops and history just in case they wipe all of the Igbos out. One of the weapons of war is hunger and that’s what they used against us in 1967 to 1970.”
Rainbow maize

On his farm, Wisdom also plants rainbow maize, which resulted in him being flown to Italy last year to showcase his produce and to engage with other rainbow maize farmers across the world. His trip was organised by Slow Food International, a grassroots organisation which seeks to preserve local food cultures and traditions.

Rainbow maize is an “heirloom variety” of corn that was produced by subsistence farmers in South Africa for centuries. It is believed the crop was brought here in the 16th century by Portuguese traders. Slow Food International is encouraging the production of rainbow maize to preserve it in the face of industrial production of maize, 80% of which is genetically modified.

Wisdom says he got 1000 rainbow corn seeds from Dr Naude Malan, founder of Soweto farmers’ lab Izindaba Zokudla, and Slow Food activist Melissa de Billot. During the 2016 harvest, Wisdom says, he produced about ten times more than the seeds he received. Last year he brought some of his rainbow corn to the farmers’ lab in Soweto to encourage other small-scale farmers around Gauteng to plant it.

He says a while ago he went to check the farmers’ progress. “There is another farmer that I gave some rainbow maize last year, and she’s doing well,” he tells me. Surprisingly, this farmer Wisdom refers to is Thembi Nxumalo. Food For Mzansi recently wrote about how she started farming with just two seed packets from a supermarket.

Wisdom owns a shop in Turffontein, a suburb on the south of the Johannesburg Metropolitan Municipality. In his shop he sells vegetables produced by other farmers of Izindaba Zokudla. Wisdom says he does this to support local and fellow farmers. “Remember, we produce organically, meaning we don’t produce the biggest, but we produce the best.”
Crime and errors made

Wisdom’s agricultural journey hasn’t been easy. He’s made some major mistakes, from which he has learned. In 2014, just a month before his 3000 chickens were ready for sale, all of them died – a loss which even today is still raw.

“I did not calculate properly how to treat and feed them. I started big by wanting to be a rich famer and instead I went down.” To recover financially and to revive his poultry business he had to start selling off his possessions, including his cars. The sacrifices were in vain and he couldn’t save the business.

A year later, 63 of his goats were stolen at night. Only one goat remained, which was also poisoned. “If I didn’t have passion for agriculture I would have stopped there,” he tells me in an emotional tone. Eventually he did give up on livestock farming.
‘All of us would grow big’

Nevertheless, he says he is quite happy to plant these vegetables, since it is less likely that the locals will steal his produce, as they are unfamiliar with most of it.

He is now experimenting with different kinds of West African vegetables to find the ones that grow well in the soil on his farm. Although he uses his shop to sell and showcase his produce and those of other farmers, he says he is not close to realising his farming dreams due to a shortage of agricultural infrastructure.

“I do not have proper water or a borehole and a greenhouse tent,” he tells me. But he remains hopeful that his business will expand to produce enough of these vegetables which are in such high demand within the economic hubs.

“I want to produce organic food of quality, which people will eat and enjoy,” he says. “Agriculture is something that, if black people were a little bit loving and supporting of each other, could let all of us grow big. Poverty will go out of our families.”
Essay Igbo Diaspora Igbo Region South Africa