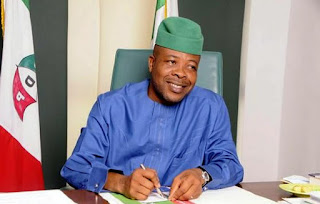 OWERRI (PUNCH) -- Imo State Governor, Emeka Ihedioha, has promised to give five per cent of the monthly allocation of the local government areas in the state to traditional rulers.

The governor, who spoke at a meeting with traditional rulers in the state in Owerri, said the allocation was lawful and would help the royal fathers to develop their domains.

He equally promised to encourage full autonomy for local council administrations in the state, as well as the state House of Assembly.

“The local government is the most important tier of government as it is the closest to the people.

“We will give full autonomy to the local government. The legislature will also have its autonomy. I will not interfere with the activities of the legislature. There will also be financial autonomy. We are doing this because we know that it is constitutional.

“I met a state where many things had gone wrong. But that is why we have come to rebuild. I cannot do this without the Ezes (traditional rulers). I urge you to join hands with me to rebuild Imo,” the governor said at the meeting.

Meanwhile, residents of Owerri, the state capital, have called on Ihedioha to prevail on the state waste management agency to urgently remove the heaps of refuse on Mbaise Road and other residential areas in the metropolis.

They described the refuse dumps as a health hazard.

Speaking to Southern City News on Friday, a resident, who gave his name as Mr Simon Osuji, said the heaps of refuse had been on the streets for over four weeks.

Osuji, a widower, who said that the refuse on Mbaise Road had led to sickness among members of his family, noted that his children had been admitted in hospital for two consecutive times.

He disclosed that the heaps of garbage on the road had made the metropolis filthy, disturbed free flow of traffic and affected business activities in the area.

“Many residential buildings are around the heaps of refuse; many of our children, owing to the repulsive odour have fallen sick, some of them had abdominal disorder, malaria, typhoid fever, among others.

“Personally, I have spent fortunes in various hospitals. My children cannot sleep if the generator is not on in order to drive away the repulsive odour and mosquitoes. We are dying in the area; we are, therefore, sending SOS to Governor Ihedioha to help us,” Osuji added.

Another resident, who simply identified himself as Solomon, described leaving the garbage on the road near residential buildings for weeks as wickedness and negligence on the part of the state government and relevant authorities.

He disclosed that the area was never a dump, and blamed the urban renewal programme of the past administration of Owelle Rochas Okorocha.

“The urban renewal programme, which led to the blocking of Douglas Road and part of Mbaise Road for over six months, now led to the dumping of refuse indiscriminately by the aggrieved and embattled Imo people.

“The odour is terrible and negatively affecting our health. Ihedioha has come on board to inherit it. He should do something about this,” Solomon said.

When contacted on the phone, the General Manager of Imo State Environmental Transformation Commission and Special Adviser on Environment and Sanitation, Mr Alex Emeziem, said the government was designing a new project on refuse disposal in the state.

He pleaded with the residents to give the government four weeks to stabilise and bring out the new design to alleviate their suffering.

Emeziem said, “The outgone government of Rochas Okorocha did not leave any money for the incoming administration of Ihedioha. We, as a government, are pleading with Imo people to exercise patience for us to come out with the programme.”

Copyright PUNCH.
All rights reserved. This material, and other digital content on this website, may not be reproduced, published, broadcast, rewritten or redistributed in whole or in part without prior express written permission from PUNCH
Emeka Ihedioha Igbo Igbo Politics Imo State Punch