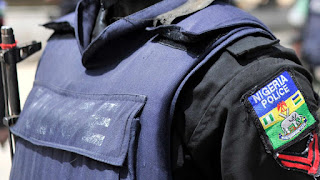 Image via The Guardian

OWERRI, IMO STATE (THE GUARDIAN) -- The Magistrate Court in Omuma, Oru East local council of Imo State on Friday arraigned a native doctor, Obelechukwu Iwegbulam, and pastor of a Sabbath church, Solomon Ezenwa-Duru, on a two-count charge of conspiracy to commit murder and an attempted murder.

Others also arraigned were the Oru East embattled chairman of the Peoples Democratic Party (PDP), Anayo Nwajiezi and one Maduka Dike.

The applicants who are mainly top PDP chieftains in the area had raised the alarm of threat to their lives (through diabolic means) leading to the arrest of the accused persons and their arraignment in court.

After hearing the prayers made by the prosecuting counsels led by Ambrose Elibo and the defendants’ counsels, John Onwuneme and Mascot Onwubueze, the Chief Magistrate, Emeka Ukachukwu, declined to entertain the matter on the ground that the court lacked the jurisdiction to award maximum punishment for the offence if the accused persons are found guilty as charged.

The Magistrate said he would seek advice from the Director of Public Prosecution (DPP) on the matter, to know whether the court has the power to award life imprisonment, which the relevant laws stipulated for the second count charge of attempted murder.

Also, the application to grant bail to the four defendants was vehemently opposed by the prosecutor on the grounds that the accused persons have not presented credible and reliable sureties and some of them do not have traceable contact address. He added that granting them bail would amount to unleashing further threat to the victims, who according to him are still living in fear, but the society at large.

The Chief Magistrate thereafter adjourned the matter to July 5 for hearing on the application for bail and ordered that the accused persons be reminded at Owerri Prison.