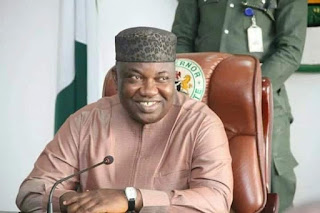 ENUGU (LEGIT) -- Former Super Eagles captain, Austin ‘Jay Jay’ Okocha and former director-general of the Nigerian Broadcasting Commission (NBC), Mr Emeka Mbah are among professionals, technocrats and experts, inaugurated on Monday by Governor Ifeanyi Ugwuanyi of Enugu state as members of the last batch of the sectoral ad-hoc committees to review various sectors of the state government and design road maps for optimized service delivery and advancement of good governance in the state.

It would be recalled that Gov Ugwuanyi recently inaugurated the first batch of seven ad-hoc committees in the sectors of education; health; public service reform; security; justice; water and chieftaincy/ community matters.

Presenting the committees’ terms of reference, the governor, who expressed the desire of his administration to perform better in its IGR growth and other economic indices to improve the socio-economic well-being of the people of Enugu state, stated that the finance committee shall assist in designing a road map to further boost positive returns on our assets, increase our IGR and optimize outcomes of development partner support.

He added that the strategy was also in keeping with President Muhammadu Buhari’s call on state governors to prioritize their IGR drive for the well-being of their people, stating that: “The economic viability of states in Nigeria is bench-marked on the parity between their Internally Generated Revenue (IGR) and their share of federal account allocations”.

According to him: “Although Enugu state is currently ranked as the seventh most economically viable state in Nigeria, we seek to perform better for the sake of improving the lives of our people and fulfilling our electoral promises.”

On agriculture and rural development, Gov Ugwuanyi, who noted that Enugu is predominantly a rural and agrarian state, with a substantial proportion of its working population engaged in farming, disclosed that the committee, is expected to design a workable road map to boost farming/agro-allied businesses in the state to generate mass employment and proffer a sustainable strategy to boost orderly and integrated development of the rural areas.

On youths and sports development, the governor who described the youth as the engine of economic growth, pointed out that Enugu state has sports talents who have won laurels within and outside the shores of the country, stressing that programmes and sponsorship are required to continue discovering and developing these youthful talents.

“The committee on youths and sports development will proffer strategies for achieving this, and for engaging the youth in sports development, character building, entrepreneurship, skills acquisition and participation in good governance”, he added.

Emphasizing the need to articulate a sustainable environmental management strategy that will deploy different initiatives to address various ecological issues affecting the state and forestall ecological disasters and environmental crisis, Gov Ugwuanyi disclosed that the committee on the sector: “Is expected to dutifully look at the totality of our interaction with terrestrial, aquatic and atmospheric environment for sustainable development, having due regard to biodiversity conservation and ecosystem balance”.

The governor further stated that the committee on lands, housing and transport is also expected to undertake a situation analysis of Enugu State’s potentials and enviable status as one of the safest states in Nigeria to live in, ranking second in ease of doing business and third in ease of starting business, that has witnessed a growing demand for land, housing and transport.

“To meet these demands, we intend to improve our land administration and management, boost orderly housing development and establish a modern intra-state transport system”, the governor revealed.

Appreciating members of the committees for accepting to serve the state, Gov. Ugwuanyi expressed confidence that they will deploy their wealth of experience, expertise and commitment to add value to the governance of Enugu state.

Responding on behalf of other members of the five newly inaugurated committees, the chairman of sustainable environmental and urban management sector, Prof Smart Uchegbu, thanked the governor for assembling ‘the cream of professionals’ to carry out the all-important assignment.

Prof Uchegbu expressed delight at the pioneering innovation adopted by Gov. Ugwuanyi to improve service delivery and good governance in Enugu State, saying: “I am really overwhelmed that for the first time, we see a dynamic governor joyfully assembling a cream of professionals to work with him, to assist him achieve more of what he has already achieved”.

He commended the numerous achievements of the governor towards the rapid development of the state, adding that he was proud that: “Enugu state is number one state in the area of security and one of the cleanest and most beautiful states in Nigeria,” and firmly in the hands of God.

The committee chairman also expressed satisfaction with the governor’s empowerment programmes, especially in the area of job creation, maintaining that the: “History of Enugu State can never be said without somebody like you who has always been directed by God Almighty”.