"I Don't Condone Evil," Iheadioha Speaks On Links To Suspected Fraudster Indicted By US 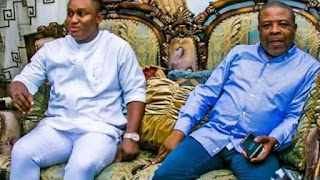 Chika Odionyenma (left), one of the suspects indicted for fraud by the U.S., was a member of the sub-committee on logistics for the inauguration of Emeka Ihedioha (right) as Imo State governor [Vanguard]

In a 252-count federal grand jury indictment unsealed on Thursday, August 22, 2019, the U.S. Department of Justice accused the defendants of participating in a massive conspiracy to steal millions of dollars through a variety of fraud schemes and launder the funds through a Los Angeles-based money laundering network ran by two Nigerians.

Odionyemma was one of the Nigerians whose names appeared in the document released to the public last week.

Many have pointed accusing fingers at Iheadioha since the list surfaced because he had appointed the accused as a member of his inauguration planning and handover committee ahead of his swearing in in May. There have also been reports that the accused financed the governor's campaign.

However, Iheadioha has said the indictment is personal to Odionyemma and shouldn't be linked to him or the Imo State government in any way.

In a statement signed by the governor's media aide, Izuchukwu Akwarandu, on Monday, August 26, 2019, he said he only associated with Odionyemma because he's an "Imo son".

He said the accused did not have any crimes hanging over his head when he was appointed by his administration and that he definitely did not finance his campaign.

He said, "It is important to note that, as of the time the governor appointed him into the inauguration committee, there was no fraud case hanging around his neck anywhere in the world.

"The time the governor attended the programmes he organised, there was no fraud case hanging around his neck anywhere in the world too.

"He is an Imo son and it was in that capacity that the governor attended his programmes. Nothing else.

"Those who say that he sponsored the governor's election are just being mischievous.

"Governorship election is a big project. It is not something you say somebody sponsored. Nobody sponsored the governor's election.

"The fraud case is personal. It has nothing to do with the governor. The governor is a man of integrity who does not condone evil.

"Those who are linking the governor to the fraud case because he attended some of the programmes Odionyemma organised or he appointed him into the inauguration committee are just being mischievous and playing petty politics."

The U.S. government has 17 suspects in custody and is on the trail of 57 other suspects spread across nine countries.

"We believe this is one of the largest cases of its kind in US history," United States Attorney for the Central District of California, Nick Hanna, said during a press conference on Thursday.
Criminal ring stole millions of dollars

The Assistant Director in Charge of the Los Angeles Field Office of the Federal Bureau of Investigation (FBI), Paul Delacourt, said last week that the case involves 32 confirmed victims located in the U.S., Japan, the United Kingdom, Lebanon, Ukraine, China, Mexico, Germany, Indonesia, the United Arab Emirates, and Trinidad and Tobago with an approximated loss of $10 million.

Investigation into the criminal ring began in 2016 with a single bank account used to receive funds stolen from a compromised business email.

"The case then evolved into a complex, sophisticated, extensive conspiracy involving various types of cyberfraud through business emails compromise, traditional romance schemes, and the laundering of the proceeds of those frauds," Delacourt said.

31-year-old Valentine Iro and 38-year-old Chukwudi Christogunus Igbokwe, both Nigerians, were used by the network for bank and money-service accounts that could receive funds fraudulently obtained from victims.

Iro and Igbokwe allegedly collected bank accounts, fielded requests for bank account information, provided that information to co-conspirators around the world, and laundered the money obtained from victims.

They did this in exchange for a cut of the money stolen from victims of the various fraud schemes.