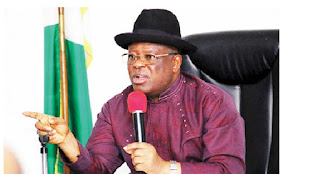 ABAKILIKI, EBONYI (PUNCH) -- The Ebonyi State Government insists the Indigenous People of Biafra remains an unlawful organisation and warned the group against organising any activity in the state.

The group a week ago protested in Abakaliki against the suspended Ruga settlement policy for herdsmen and other policies of Federal Government.

But the state government warned the public against further participation in IPOB’s activities.

In a statement on Monday by the Secretary to the State Government, Dr Kenneth Ugbala, and the Commissioner for Information and State Orientation, Chief Kenneth Uhuo, the state government advised parents and guardians not to allow their children and wards to engage in any unauthorised gathering.

According to the state government, the security agencies have been told to deal with any individual or group found to be involved in any unlawful gathering in the state.

The statement said all Igbo’s grievances would be addressed if they discussed peacefully with the Federal Government.

The state government said any individual or group in the state having any genuine reason to protest should do so through the South-East Governors’ Forum and Ohanaeze Ndigbo.

The statement read, ”The attention of the general public is hereby drawn to the Federal High Court order, which has proscribed the Indigenous People of Biafra since September 2017 and classified it as a terrorist organisation in Nigeria.

“By that order, IPOB has become an unlawful organisation and all its activities become criminal within the provisions of the Terrorism (Prevention) Act of 2011.

“Members of the public are therefore warned that any participation in the activities of the organisation, under whatever guise has become an offence punishable under various laws of the country.”

Copyright PUNCH.
All rights reserved. This material, and other digital content on this website, may not be reproduced, published, broadcast, rewritten or redistributed in whole or in part without prior express written permission from PUNCH.
Igbo Igbo Politics Newsroom Punch