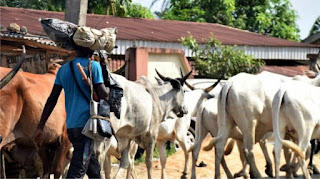 ENUGU (VANGUARD) - THE Governors of South-East geopolitical zone have banned movement of herdsmen and cattle from one community to the other within the zone.

The Governors also said they have assurances of the federal government that the shut Akanu Ibiam International airport would be reconstructed by two set of contractors to ensure that the work is completed on December this year.

They also said that the entire states in the zone would in the next one week roll out complete palliative measures as a result of the closure of the Enugu international airport.

The Governors made the disclosure in Enugu, Saturday, during their meeting with enlarged stakeholders meeting that included the Minister for Aviation, the Army, Police, the clergy, Igbo leaders, federal ministry of works, among others.

In a communiqué delivered by Chairman of the Governors Forum, Chief Dave Umahi, the stakeholders said they deliberated on two major topics on matters of insecurity and the matters arising from the closure of the Enugu airport.

Umahi said their discussion agreed that their earlier joint air operation to flush out bandits from all forest in South-East would continue.

He said “We also agreed that we have to put measures in place to restrain movement of herdsmen and their cattle from one state to another which is a source and point of conflict with the natives and farmers. And also restrain the movement of cattle and herdsmen from the community to communities across farmlands.

” While commending Enugu state governor for the establishment of Forest Guards as earlier agreed by South-East Governors, the meeting encouraged the remaining South-East governors to launch theirs.

“South-East governors have banned herdsmen who move about with AK 47 guns and cutlasses and we want our security agencies to implement same. South-East governors never invited the army nor were the South East Governors informed of any of their operations on Python Dance until the operations were already started in the states, Umahi said.

He also disclosed that they would write to President Mohammadu Buhari to request for a meeting with him and all the security Chiefs on issues of security to douse tension in the region.

“The Honourable Minister of Aviation has assured us that the Akanu Ibiam International Airport will be reconstructed to meet the Abuja International Airport standard, the runway shall be reconstructed and extended, and the landing equipment shall be replaced with a better night landing light installation and he has assured that the work will go on day and night and it must be completed before December 2019.

“Other works like the cargo section, extension of the tarmac, buildings that were damaged by rainstorm etc are also in the package. He has assured us also that two sets of contractors are pinned down for any of them to be used like Julius Berger as we requested and P&W but in the weeks ahead we will be asking him that we have a choice of Julius Berger.

“On Sam Mbakwe Airport, the Honourable Minister said they had already met and a number of facelift will be given like the barbed wire, the tarmac, the buildings; they are all going to be given facelift, where most of these planes will be diverted to and we are very happy with that.

“South East governors have already set up security committee, we shall inaugurate them today, one per state and they will play a major role with our security chiefs and also play role in this airport closure and diversion of flights

.” Speaking on the airport, the Minister for Aviation, Hadi Sirika the federal government takes the Enugu seriously as it does to Kaduna for the north and Ibadan for the south west.

“This airport is one of the five International Airports that we have, I want to assure you that we will take all the seriousness that it deserves, and we should be able to deliver this project all things being equal before Christmas.

“We are conscious and aware of the hardships that you might go through but I believe it is worth it in the interest of safety and the committee that has been formed will discuss the palliative and we will also discuss the arrangement and planning,” Sirika said.