Review: For These African Immigrants, Life Is A Haunted House 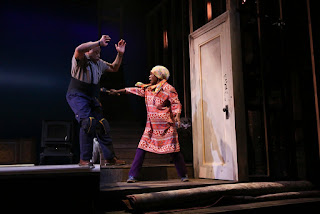 Ron Canada and Patrice Johnson Chevannes in “In Old Age,” No. 8 in Mfoniso Udofia’s Ufot cycle.Credit: Caitlin Ochs for The New York Times

In ‘runboyrun’ and ‘In Old Age,’ the latest installments of Mfoniso Udofia’s nine-play cycle, America is no place to hide from the past.

When we first met Abasiama in Mfoniso Udofia’s play “Sojourners,” it was 1978 and she had come to the United States temporarily, to study biology at Texas Southern University. But when she showed up again in “Her Portmanteau,” 36 years had elapsed and she still hadn’t returned to Nigeria.

“Sojourners” and “Her Portmanteau,” both extraordinary, were presented in repertory at New York Theater Workshop in 2017, announcing not only a formidable dramatic talent in Ms. Udofia but also a formidable main character in Abasiama. Pregnant with the child of her wayward first husband, she had to decide in “Sojourners” whether to leave or stay — and, either way, how to make a home out of nothing.

Though “Her Portmanteau” left Abasiama seemingly settled in middle age, with a second husband — Disciple Ufot — and four adult children, there was still much to learn about her and her family. “Sojourners” was merely play No. 1, and “Her Portmanteau” play No. 4, in a projected nine-part work called the Ufot cycle.

Now, with the opening on Monday of “runboyrun” and “In Old Age,” New York Theater Workshop brings us installments No. 3 and No. 8. (Two more have been written and three others are still “under construction.”) Together, the new plays deepen our understanding of the invisible burdens that can weigh down the lives of even the most successful immigrants.

That the burdens are not as fresh or surprising as in the earlier works may be the inevitable result of time’s passing within the world Ms. Udofia created. “Sojourners” already established the incipient mental disarray threatening to undermine Disciple (Chiké Johnson) and thus his uneasy new alliance with Abasiama (Patrice Johnson Chevannes). By the time “runboyrun,” directed by Loretta Greco, finds them locked in the same struggle decades later, there is little drama left in it.

Indeed, Disciple’s life in 2012 is not a new disaster. Though a brilliant scholar of African history, he finds himself at 56 an adjunct teacher at a community college, where he has recently been the subject of complaints by students about his hygiene. At home, in a careworn old pile of a house in Worcester, Mass., he alternates between muteness and mania, trying to cleanse the rooms of unwelcome spirits but also wildly accusing Abasiama of sleeping with men at her church.

In response to years of this treatment, Abasiama has become almost larval in her despair. As the play begins she hibernates on the living room sofa, so bundled under blankets (the house is under-heated) that she seems to have become a part of it. Even so, she eventually bestirs herself to tell Disciple that she wants a divorce. If it is the first time she has done so, it will not be the last.

But “runboyrun” complicates this domestic drama with what amounts to a ghost story; there are other characters living in the house, or at least in Disciple’s delusions of it. These are his mother and siblings and younger self, in 1968, noncombatants caught in the midst of Nigeria’s civil war over the breakaway region of Biafra. Nearly starving, frequently shelled, unthinkably brave, they help us identify, reasonably but perhaps too neatly, Disciple’s lifelong problems as a form of post-traumatic stress.

“Sometimes peace cannot exist,” his mother tells him in one of these flashbacks. Though she is referring to the unhinged animosities of war, we understand the phrase to apply to individuals as well.

Ms. Greco does a smart job of abutting and gradually intertwining the stories; at times, under Oona Curley’s lighting, they almost appear to be shot on two different film stocks. But the staging is unable to overcome a static quality in the 2012 scenes, which keep repeating the same dynamic — accusation and resignation — until finally Abasiama pulls herself together in an effort to end the abuse.

Though it’s a moving moment when she begins to get through to her husband with tough love, the play nevertheless leaves you doubting her success. The story, Ms. Udofia suggests, is destined to repeat itself; there is only so far one can run from the past.

That thesis is put to an extreme test in the second half of the double bill, “In Old Age.” Set “in a future far removed,” it picks up Abasiama’s story some years after Disciple’s death, when you think she might at last be free from his chaos. But no, just as he was forever haunted by the war he once lived through, she is forever haunted by him; using the voice of the house itself he shouts at her day and night in a symphony of clangs and creaks that would drive anyone crazy. (The sound designer David Van Tieghem should get an award, or a summons.)

However dark the subject, “In Old Age” is structured as a comedy, and a familiar one at that: a comedy of attrition. Over the course of a week’s worth of visits, Azell Abernathy, a handyman hired by Abasiama’s adult children to replace the old house’s creaky floors, gradually wears down her terrifying resistance and opens her up to renewal. You can tell how little independent function Azell (Ron Canada) has in the proceedings by keeping an eye on his “work”; as directed by Awoye Timpo, he keeps measuring the same few inches without getting anything done.

A character like that, central neither to the Ufot story nor, it appears, to his own, could only get work in a play. He is a prop, there merely to jimmy Abasiama into conflict with forces he has nothing to do with: the deceased Disciple and the noisy house itself. No amount of charm — and Mr. Canada is charming — can make that dramaturgical device stop creaking.

Luckily, Ms. Johnson Chevannes can; she is spectacular throughout the two plays. Sometimes this means suggesting the encroaching frailty of a hollowed-out woman; sometimes the way such a woman nevertheless corrals her remaining strength to resume a lifelong fight against despair.

Between these two extremes she creates a character who is pitiable and yet too awesome to be pitied. When she is finally granted a moment of joy, you understand why Azell (and the playwright) keep coming back to her despite her forbidding qualities; sometimes, if only briefly, peace can exist, and it’s beautiful.

Jesse Green is the co-chief theater critic. Before joining The Times in 2017, he was the theater critic for New York magazine and a contributing editor. He is the author of a novel, “O Beautiful,” and a memoir, “The Velveteen Father.”
Cinema Igbo Diaspora New York New York Times Theater