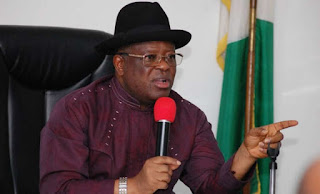 Barely a few days after banning the activities of Fulani Herdsmen in South-East, unknown Policemen invaded the Abuja residence of the Chairman of South-East Governors Forum, And Ebonyi State Governor, Engr Dave Umahi.

A report forwarded to ABACITYBLOG by Ohanaeze Youth Council, cited that the incident happened early hours of yesterday. The group who condemned the illegal invasion, alleged that the unknown security men stormed the place with evil intent to plant weapons and ammunition to indict the Governor and blackmail them to reverse their decision on the recent ban of pastoralists.

“This is a clear evidence that those sponsoring terrorism in the South East through the nefarious activities of murderous herdsmen have developed cold feet and had met their Waterloo as Ohanaeze youths ensure that the enforcement of the ban starts immediately and no threat on the Governors will reverse the ban on the pastoralists”, Ohanaeze said.

“We are fully aware that many intimidation and blackmail plots are lined up for South East Governors ahead, especially using Anti graft agencies to scuttle the rising profile of South East Governors ahead of the realisation of Nigeria’s Presidency project of Igbo stock 2023, no weapon can destroy an idea whose time has come irrespective of the nefarious activities of these political cartels”.

Ohanaeze, however, demand the Inspector General, Mohammed Adamu, to unravel the identity of the policemen behind invasion else, they will exposed them to Nigerians.

“From intelligence report, those behind the Abuja invasion of Governor Umahi’s residence are highly placed politicians who are afraid of the resolutions of the South East Governors on the ban on Herdsmen conveying cattle on foot, and we ask IGP to fish out those that commanded the police officers to illegally invade the house of Ebonyi State Governor, we expect the IGP to expose them immediately or Igbo youths will expose them for Nigerians to know the details,

“we will no longer tolerate any further intimidation of South East Governors from any quarter from henceforth, the current Political Persecution of South East Governors by these faceless political Cartels is to forestall 2023 Igbo Presidency project and reversal of the ban on Herdsmen movement of cattle on foot, their evil plot is dead on arrival.