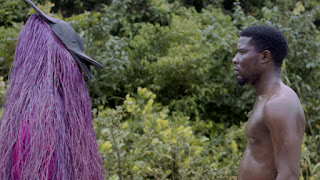 A security guard who spends his days lamenting urban detachment has a startling encounter with the past in The Lost Okoroshi, Abba Makama's semicomic tale of spiritual possession. Set in Lagos, it imagines the man transforming into a spirit that, for generations, has been represented by masked dancers in Igbo ceremonies. The result is low-key mayhem whose impact on characters' lives has a fable-like quality, weighty only in its reflection of real-world cultural concerns. Certain aspects of the film sync up well with hipster American tastes — though the label "Afrofuturism" doesn't quite apply here, its use will draw appropriate attention — making this the rare Nigerian film with some potential in stateside art houses. (The kinship is especially strong in the film's synth-heavy soundtrack, which pairs new music by Shay Who with recent rediscoveries by the late Nigerian funkster William Onyeabor.)

Raymond (Seun Ajayi) is plagued by nightmares in which costumed men dance and chase him, catching up to him just as he jolts awake. When he shares these dreams over palm wine with Okonkwo (Chiwetalu Agu), a man he calls "chief," the older man chides the "city boy" for knowing so little about his heritage. These are the kind of masquerades that routinely visited communities in the past; though the city's evils now prevent spirits from manifesting fully, these dreams are ancestors sending Raymond a message.

Maybe Raymond, who lives in the country but works in a Lagos high-rise, is sensitive to such visions because of his skepticism about the lives of those he works for: He and a co-worker spend their days (when not ogling the women who pass by) mocking the smartphone-zombies who rush through their building's lobby without looking up. Whatever the reason, the spirits of the past soon do more than send messages: Raymond awakens from one dream wearing the costume of his main pursuer, a figure with an Okoroshi mask and a cloak of purple-dyed raffia. He can't take it off, and he can't speak, so it takes an uncomfortably long time for Raymond's wife Nneka (Judith Audu) to understand the creature in her bed is her husband. Before she can get him help, though, Raymond vanishes — teleporting against his will to some strange part of the city. (Nneka literally falls out of her seat when Raymond disappears, which gives you an idea how slapstick and magic collide here; playful jump-cuts extend the vibe of art-conscious farce.)

Voiceless but gifted with some supernatural powers, the Okoroshi seems at first like an accidental superhero; he saves a prostitute's life and, when that's not enough for her, he comes up with the money her homicidal trick refused to pay her. A young boy called Willy Willy (Ejetareme Ajotubu Micheal, giving the film's most entertaining performance) takes the mystery man under his wing, aiming to monetize his attention-getting appearances. He rambles energetically about "packaging" while the Okoroshi dances on street corners, being showered with bystanders' money as if he were a stripper.

Willy Willy isn't the only stranger with his own agenda for the costumed man. A local academic who learns of the phenomenon quickly weaves it into his understanding of the "conduits" through which traditional tribal energies emerge into "the chaos of urban Nigerian life." And a secret society of Igbo traditionalists actually kidnap the spirit, bringing him back to their headquarters to worship him and debate how he can aid their agenda.

In a very long scene, the squabbling among these activists seems to reflect Makama's own amused dismissal of those who would lay personal claim to vanishing cultures. But as the Okoroshi encounters more of Lagos' dark side, witnessing poverty, pollution and violent crime, it's clear the movie isn't just a joke. The scholar returns at the film's end, promising that in a world as imbalanced as this one, further eruptions of ancient spirit energy are inevitable. As the credits roll, we see images of a menagerie of wildly costumed performers. What the film doesn't acknowledge is that these photos are from ceremonies held not in Nigeria but all over Europe; they're from a dazzling photo book called Wilder Mann, whose author Charles Freger has shot similar subjects in Asia and the Americas. The tacit implication is that central Africa isn't the only place where ancient knowledge and technology-driven civilization are in disharmony, and that things are going to get weirder until cultures everywhere do a better job reconciling modern preoccupations with timeless concerns.