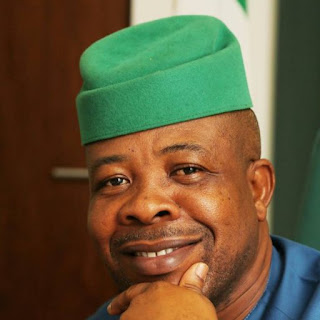 OWERRI (PUNCH) -- Governor of Imo State Emeka Ihedioha on Friday alleged that his predecessor, Senator Rochas Okorocha, refused to leave a handover report because there was “a total abuse and neglect of laid down procedures of good governance” by his government.

Ihedioha, who spoke at a ceremony marking his 100 days in office, said he inherited a huge debt from the Okorocha administration.

He said he inherited N30bn as a garnishee order and six years’ unpaid pension.

Ihedioha said situation was compounded by the almost N1bn statutory deduction by the Federation Account Allocation Committee, largely for the repayment of the N26.8b bailout package given to the Okorocha administration by the Federal Government.

The governor said, “It is important to recall that we took over the reins of government without even a handover report. A handover report, traditionally, is the least responsibility an outgoing administration owes an incoming one. Unfortunately, this was not done.

“We discovered upon inception that the inability to provide the necessary documentation was due to a total abuse and neglect of laid down procedures of good governance. The most shocking were the litany of ‘garnishee absolute orders’ amounting to over N30bn, in addition to six years’ unpaid pension, as well as salary arrears.

“Projects were poorly conceived, shabbily executed or hastily abandoned. We have even found some of them very hazardous to human safety.

“It is worthy of note that with our wage bill, at an average of N2.5bn per month, almost N1b monthly pension bill and in an atmosphere of very low IGR, leaves very little for development.

This is compounded by the almost N1bn statutory deduction on our FAAC, mainly for the repayment of the N26.8bn bailout funds given to the last administration by the FG.”

He said, “As a government that espouses the rule of law, we will never endorse any manifestation of arbitrary powers. As a result, we have set up two judicial panels of inquiry – the Judicial Panel of Inquiry into Land Allocation from 2005 to 2019 – and the Judicial Panel of Inquiry into the Award of Contracts from 2005 to 2019.

“We have also set up an inquiry into the management of local government finances from 2011 to 2019. These panels are made up of very credible Imo citizens with impeccable track records and we are certain they will give Imo people justice.”

All rights reserved. This material, and other digital content on this website, may not be reproduced, published, broadcast, rewritten or redistributed in whole or in part without prior express written permission from PUNCH.
Emeka Ihedioha Imo State Newsroom Punch