Booker… It Should Be Chigozie Obioma’s Year 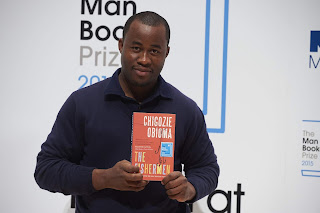 Chigozie Obioma, pictured with his book "The Fishermen" ahead of the 2015 Man Booker Prize for Fiction ceremony in London, October 12, 2015. Image: Niklas Hallen'N/AFP/Getty

By Monday, the judges of the Man Booker Prize will announce the winner for this year.

I expect the winner to be no one else but Chigozie Obioma, the author of An Orchestra of Minorities, in which the chi, the guidance spirit in Igbo cosmology, is the narrator. You can say Chi wrote about chi and you will be right.

I am sure I am not the only one expecting Chigozie to carry the day. Not because this is his second nomination but because An Orchestra of Minorities is phenomenal.

I am not saying the other books on the shortlist are not good or great but Chigozie’s book is something all humanity can relate with. It is not about European politics or American niceties.

It is about humanity, our humanity and that should count. It is also superbly written.

If there is any paragraph in Chi’s book that will stay with me for a long time, it is where the chi speaks of “the land of lack, of man-pass-man, the land in which a man’s greatest enemies are members of his household; a land of kidnappers, of ritual killers, of policemen who bully those they encounter on the road and shoot those who don’t bribe them, of leaders who treat those they lead with contempt and rob them of their commonwealth, of frequent riots and crisis, of long strikes, of petrol shortages, of joblessness, of clogged gutters, of potholed roads…and of constant power outages”.

He is a first-class student at the Cyprus International University, where he won a scholarship for a second degree and stayed back to lecture before America beckoned. At 27, his novel The Fishermen, which was shortlisted for the Man Booker Prize, shook the literary community.

Now at 33, he is an Assistant Professor of Literature and Creative Writing at the University of Nebraska-Lincoln. His An Orchestra of Minorities, in my view, has the potential to do better than The Fishermen.

Chigozie is in love with artistry.

He says: “I think it is a mistake when you just set out to pursue an agenda. Artistry should be the focus.

“If not, you end up writing propaganda and I see that a lot. True it can get you a lot of money and fame because everybody is politically wired, but it will not endure in the end. What endures in the most is the art.”

This quest for enduring art has created a problem for him. The problem is that he is always on the lookout for ways, other than the traditional, to tell stories.

No wonder he wrote an over 500-page long novel in which the narrator is the chi. “I don’t like to tell stories in a traditional way so I am always thinking of an invention.”

Those who have read Chi’s essay, The Audacity of Prose, will not be surprised about his ‘disdain’ for the traditional.

“The essential work of art is to magnify the ordinary, to make that which is banal glorious through artistic exploration.

Thus, fiction must be different from reportage; painting from photography. And this difference should be reflected in the language of the work — in its deliberate constructiveness, its measured adornment of thought, and in the arrangement of representative images so that the fiction about a known world becomes an elevated vision of that world.

That is, the language acts to give the “ordinary” the kind of artistic clarity that is the equivalent of special effects in film. While the special effect can be achieved by manipulating various aspects of the novel, such as the structure, voice, setting, and others, the language is the most malleable of all of them. All these can hardly be achieved with sparse, strewn-down prose that mimics silence,” he argued in that essay for The Millions.

I left Labule restaurant in Ogudu-GRA, Lagos that Monday when we spoke in April with the feeling that pursuing one’s passion and standing for what you believe are enduring virtues.

Before studying in Cyprus, Chi was at a private university in Enugu. But, his chi led him away from the place, which he saw as a time-waster.

“I did Economics in a Nigerian private university in Enugu but it was a complete waste of my time. I left there because I was always protesting and they were going to throw me out.”

His chi led him to Cyprus where his star shone and soon America saw it and liked it and we are all reaping the goodness through The Fishermen and An Orchestra of Minorities and more to come.

He also struck me as very principled. Or, how do you see someone who pulled his book from a dollar-denominated prize because he felt the sponsor was causing havoc to the people?

I love the fact that Chi also put to good use the interesting dynamics of his childhood. He is the fifth of twelve children. Their home in Akure, the Ondo State capital, was noisy.

As a recluse, he would always hide and books provided him safe havens. This Chi, who speaks Yoruba, Igbo, English and Turkish, started reading as early as six years of age.

And the more he read the more he discovered he could also write. Noise thus produced a world-class writer. What this means is that we can always make something of whatever situation we find ourselves.

As the potential laureates and judges are in London for the final push before the D-day, my heart is with Chigozie because he is damn good. This should be Chigozie Obioma’s Booker Prize year and I look forward to the announcement on Monday.