The Legacies Of Slavery In Nigeria’s Igboland 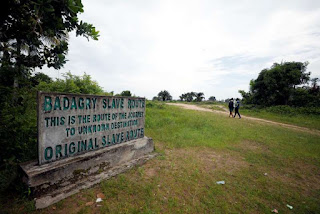 Two people walk along the route taken by slaves to the "point of no return" , from where they were shipped west, at the historic slave port of Badagry. Image Afolabi Sotunde/Reuters


The year 2019 marks four hundred years since the beginning of African slavery in America, when Dutch privateers sold the first African slaves to the fledgling English settlement at Jamestown, Virginia. The anniversary has been the occasion for much reflection on how slavery still impacts America. The New York Times’s “1619 Project” has dedicated a number of essays on slavery’s legacy in American society. Also to be welcomed is the increased attention by African scholars and journalists to the role that domestic slavery and the international slave trade has had on African cultures. Igboland was a major source of slaves for Virginia and the American south.

Adaobi Tricia Nwaubani, a journalist and novelist of Igbo heritage, has reported and written recently about Africa’s role in the slave trade and on the legacy of slavery in her native Nigeria, specifically among the Igbo. In the New Yorker, she shows that slavery was integral to Igbo culture even prior to the Atlantic Slave Trade, though such commerce created new incentives for slave-catching.

In her New Yorker article, Nwaubani draws useful distinctions between slavery as practiced in the United States and among the Igbo. Notably, Igbo slavery was not based on race, and there was no visible, physical difference between slave and freeperson. Rather, slavery was shaped by culture, their beliefs about the importance of lineage, and their spirituality. She explains that slaves usually came from outside the all-important local community, captured in raids or warfare, or enslaved because of a criminal act. It is estimated that between 10 and 20 percent of Igbos—amounting to many millions of people—are descendants of slaves, and she shows that they are subject to discrimination.

The Igbo emphasis on purity of lineage goes hand-in-hand with a belief that marriage between the descendants of the free with the descendants of slaves can bring about divine retribution. She notes that Igbo slaves shared similarities of status with the dalits (untouchables) in India and burakumin in Japan.

While slavery became illegal in both the United States and Nigeria, Nwaubani notes that the abolition of slavery in the United States was a result of internal agitation that gradually brought about a (incomplete) change in the popular view of slavery and of race. In Nigeria, however, slavery, which she sees as continuing in some forms among the Igbo into the 1940s, was abolished by British fiat, not as the result of an internal, indigenous process. Hence, abolition of slavery was a colonial initiative.

However, Nwaubani reports that now underway is the internal agitation against slavery that Nigeria’s story had hitherto lacked. The focus is on community-led initiatives, often in conjunction with traditional rulers, to end discrimination against those Igbos whose ancestors were slaves.