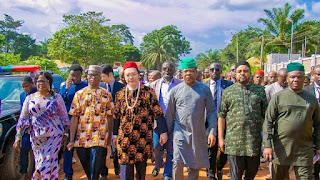 Gov Ihedioha commissions a project in the state. Image via Pulse

The governor has set up an inter-ministerial committee to map out strategies for their resettlement, says Chibuike Onyeukwu, Chief Press Secretary to the Governor.

Receiving the returnees at the Government House, Owerri this week, Governor Ihedioha, appreciated God for saving the lives of the returnees and reminded them that this is a period for soul searching.

"We understand clearly the import of this incident. What the displacement has given rise to, is that you have to start afresh, begin to adjust and start a new life," Ihedioha said.

The governor also announced that a desk has been set up to articulate a plan that will guarantee sustainable livelihoods for them.
A committee to look after returnees

Ihedioha disclosed that the inter ministerial resettlement committee which will be headed by his Special Adviser on Diaspora Affairs, Prof, Chudi Uwazuruike, will be made up of the ministries of Youth; Labour; Education; Health and will be supervised by the Ministry of Gender and Vulnerable Group Affairs.

The governor also assured that the state is doing its best to partner with the federal government in order to ensure that special attention is given to Imo returnees, as the state has fulfilled all the requirements needed by the Diaspora Commission.
Xenophobia in the rainbow nation

The latest spate of attacks on migrants in South Africa began from the suburbs of Johannesburg on Sunday, September 1, 2019.

By Monday, September 2, South African men and women clutching cudgels and stones were chanting war songs and marching to the central business district of South Africa’s biggest city to burn shops and businesses owned by Nigerians, Somalians and other foreign nationals.

Before long, more than 50 shops and business premises mainly owned by Nigerians and Somalians, had been burnt to the ground.

12 persons reportedly died in the latest attacks, a chunk of them South Africans.

In the wake of the attacks, the federal government airlifted Nigerians who were willing to return home, in partnership with private airline Air Peace.

The attacks threatened relations between Nigeria and South Africa, the two biggest economies on the continent.

Nigeria's President Muhammadu Buhari has just returned from South Africa where he discussed the attacks with his South African President Cyril Ramaphosa.