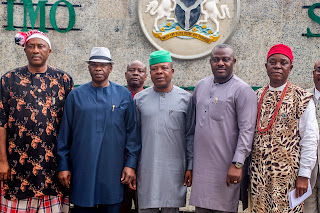 
Fourty years ago, 1979 to be precise, the government of Imo state, then presided over by the late Sam Mbakwe, came up with the idea of an annual Ahiajoku lecture. Underlying that idea was the need to make deliberate efforts to articulate and project Igbo culture. Specifically the government outlined the objectives of the lecture series thus: To define aspects of Igbo culture and relate them to the main corpus of Nigerian culture as well as to African and world civilization; to create a challenging situation for scholars to undertake relevant research on Igbo culture, especially the more basic and fundamental ones; to relate the research to Igbo world view and total human development and, fourthly, to establish a diachronic relationship in each discipline as regard Igbo human development.

And why the title, Ahiajoku Lecture? According to a citation on the lecture series by the then ministry of information, youths and sports, “this title is an Igbo conceptual reference to cultivation, fertility and harvest. Yam being the prestige and culturally important crop of the Igbo people that it is, its cultivation and harvesting are traditionally linked with Ahiajoku which is also variously called in Igbo land, Ufiejoku, Ifejioku, Njokuji, Ihinjoku, Ahiajoku, Ahajoku, Fijiku, Ajoku, Aja Njoku Or Ajaamajia”.

The citation further stated that “the Ahiajoku lecture series is essentially an annual harvest of thought. All Igbo people and indeed all Nigerians and the world at large are invited to join the civilization, harvest and feast….Scholars, men and women of all fields of endeavour should come forth and show Igbo contribution to the Nigerian, nay, world civilization”.

To kick start the search for the actualization of these broad objectives, the state government invited erudite scholars and professor of English Language, Michael Joseph Chukwudalu Echeruo, to deliver the very first lecture in the series on Friday, November 30, 1979 at the multipurpose hall, government house, Owerri.

A citation of Professor Echeruo read at the occasion by another scholar and historian, Professor Adiele Afigbo, now of the blessed memory, said of Echeruo, among other things, thus: “Michael Echeruo’s national and international standing as a scholar is indeed a source of pride and inspiration to his friends.

And the important point is that this international standing derives not just from his ability as a teacher or just from his achievement as an academic … It derives, first and foremost, from his productivity as a scholar. And this productivity has been marked by happy versatility, rich variety, unfailing originality and incisiveness, as by limpidity of style and cold, unwavering logic. Michael Echeruo is one practitioner of his craft on the African continent that I know of today who is at home in creative writing and literary criticism, in African literature, American literature and English literature. He is the only one on the continent I know of who has made significant contributions to the study of some of the seminal minds in English and African literature”.

In attendance at the lecture were numerous Igbo sons and daughters, especially scholars who came from various parts of the country. Of course, Professor Echeruo, who was at that time professor of English language at Nigerian premier university, the University of Ibadan, lived up to expectations. He delivered a lecture that has remained a reference point forty years after. His lecture was entitled, “A Matter Of Identity” which he chose himself because the organizers of the lecture series made it clear from the beginning that each lecturer is free to choose his or her own topic and language of delivery.

Exactly forty years after, Professor MJC Echeruo, now emeritus professor of Syracuse University, an Ivy League institution in the United States of America and also Williams Safire professor of Modern Letters emeritus, is billed to deliver the 2019 lecture on November 30, at the Ahiajoku center, Owerri.

Perhaps the very climax of the lecture series was the 2009 lecture which was delivered by the late literary icon, Professor Chinua Achebe. The 2009 lecture, however, turned out to be the last since that date as the administration that took over in 2011 could not organize the lecture for the eight-year period it was in charge. It is how to regalvanze the interest of Ndigbo and Nigerians generally following this eight-year long lacuna that poses the major challenge to the current administration in the state which has vowed to revive the lecture series and reposition it for achieving the goals which its founding fathers had in mind.

Incidentally, two key personalities who are currently involved in this task were also the very brains behind the 2009 lecture delivered by Achebe and which, perhaps next only to the inaugural of 1979, is considered the most memorable so far. The two fellows are former governor of the state, His Excellency, Chief Ikedi Ohakim and his then commissioner for information and culture, Dr. Amanze Obi. For the 2019 lecture, Dr. Ohakim is the chairman of the planning committee set up by the incumbent governor, Rt. Hon. Emeka Ihedioha, while Obi is the Director-General of the Ahijoku Institute which he supervised as commissioner eight years ago.

As the DG of the Ahiajoku Institute, the day-to-day task of ensuring a successful outing this year falls on Dr. Obi. In a recent newspaper interview, Dr. Ohakim noted that his committee is looking beyond the eight-year set back and working to recover every lost ground that arose therefrom. In this bid, the lecture series, according to the former governor, now transcends the Igbo nation; and has now been “elevated to a pan Eastern Nigeria event”. He explains further: “The 2019 lecture is bringing together the people in the former Eastern region who though may be speaking different tongues, have a common historical experience”. Ohakim further hinted that the governors of Rivers, Bayelsa, Akwa Ibom and Cross River states have indicated interest to attend the November 30, 2019 event in Owerri.

This is a grand plan but isn’t the Ahiajoku lecture series just another talking platform which many Nigerians believe are already too many in the country? It may appear so but the organizers of this year’s lecture are quite optimistic that it is capable of rekindling the interest of the Igbo generally to avail themselves opportunities for robust discourse on matters concerning their welfare as a people and their relationship with their follow compatriots across the country.

Feelers have it that the organizers are poised to make the event far more memorable than it had ever been, more so being the 40th anniversary of the series and attracting no less a personality like Professor Echeruo, as lecturer. The event will be co-chaired by two other prominent Igbo personalities: The Obi of Onitsha, Alfred Achebe (Agbogidi) and former number two citizen of the country and former military governor of Lagos state, Ochiagha Ebitu Ukiwe. The state government is said to be leaving no stone unturned to ensure that the event records a new success.

While inaugurating the planning committee, Governor Ihedioha charged its members to see the assignment as an opportunity to help in rewriting some of the not so palatable aspects of Igbo history.