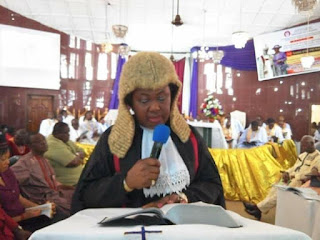 OWERRI, IMO STATE (VANGUARD) -- The Imo state traditional rulers yesterday, cried out to the federal government of Nigeria, over the abduction of Justice Chioma Nwosu Iheme, by gunmen along Benin/Agbo road last week. The Chairman of the royal fathers, Eze Imo, Samuel Ohiri, alongside his Deputy, Eshi of Nkwerre, Eze Chijioke Okwara, made the call at the Eze Imo Palace at Mbari street in Owerri.

Vanguard was at the palace of Eze Imo, where he said that the people of the state, at the moment are not happy that after seven days their daughter, Iheme, was nowhere to be found. They also said that so far no communication has been established with her abductors.

Ohiri briefly said: “We are not happy that our daughter was kidnapped and taken away to an unknown destination. “The people of Imo state have not heard from our daughter and we are pleading with the federal government because she is a government employee that we have not happy and we want our daughter back simple and short, is just that the people of Imo state, want our daughter back to us.” Also speaking, the Deputy Chairman of Imo state traditional rulers, Eze Okwarra, of Nkwerre local government area, where Justice Nwosu Iheme, hails from said that he has canceled ceremonial activities in the area as a sign that they are currently pained over the abduction of Justice Iheme. Eze Okwarra said: “As the Deputy Chairman of Imo state traditional rulers, we are not happy that Iheme, is still in the den of the kidnappers and the untimely dead of her police escort. “We are not happy that judiciary who ate suppose to serve the public, their duty which is contained in the I999 constitution to interpret the law and now facing this kind of threat. “For the past months we have been hearing that judges are kidnapped and we want to appeal to the Federal government and 36 states governors to do something quickly.

“We the traditional rulers of Imo state, want to see our country with solid security network to allow our people do their work without fear. We are saddened that we have not heard anything about her since her kidnapped for the past 7 days now. “Let me expatiate on it, we have made every contact and we have contacted the judiciary and after seven days it is right to ask where she is. We are asking her employers to do something. “If we allow the judges to be picked anyhow then they will be afraid to give justice. As a result of this incident, I have cancelled all ceremonial activities in the community.”
Chioma Nwosu Iheme Igbo Nigeria Vanguard