Ojiaka Ekwu Okwu: Minstrel Who Plays Only For Kings, Wealthy 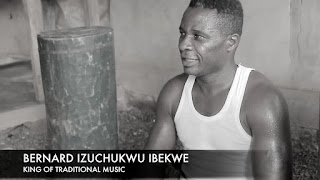 
One of the things that make Igbo tick is their rich cultural heritage. Music is one aspect of Igbo way of life that has witnessed great transformation overtime, though yet to be whittled down by modernity. Igbo cultural music especially in Anambra State has various genres, one of which is Ufie; widely referred to as the king of music. It is also called Uvie or Igede in some parts of the state.

It is popularly said that “Ufie adighi aku be ogbenye,” meaning that Ufie music does not play in a poor man’s house. It is indeed music of royalty, meant only for kings, the wealthy and the powerful (warriors).

A 47-year-old man, Bernard Izuchukwu Ibekwe from Adazi Enu in Anaocha Local Government Area of anambra state has created a niche for himself with Ufie music.

Popularly called Ojiaka Ekwu Okwu, Ibekwe has travelled to some African countries and the United States of America with his music.

When Daily Sun met him recently, he spoke so passionately about his vocation. “My music is called Ufie in and around Anaocha, Aguata and Orumba; people of Anambra East, Anambra West and up there call it Igede.

“When you coronate the monarch, this is the only music he will dance, the Onowu will not dance any other music except this, the titled men do not dance kurukere dance, the only music that can be brought close is Igboeze which he may use to go out. But in the palace, Ufie must be there before any coronation takes place.”

Ibekwe who said he has played Ufie music for ten years disclosed that his father and grandfather also excelled in the vocation. “This music my forefather played it, my father played it. My forefather played it and when he died the lot fell on my father out of all his siblings, he did not learn it from anywhere and my father played it for many years. He was playing it before my birth and continued until he died in 1995. Before he died he told me that I will be the one to do all he used to do notwithstanding that I am not the first son. My father married two wives and I am sixth male child.

“So I started in 2009. My father made his instruments likewise I. All these instruments I use, I make them myself, anyone that learnt the music; I will be the one to make the instrument for him, you cannot find it in the market. Those whom I taught the music and who were opportune to learn it, I made their instruments for them.

“I inherited it from my father, but those who come to learn it from me; I give conditions and things they will do so that they can learn it and take it home.”

“So God has been blessing me and I have repackaged it that wherever I go they say Ufie has gone digital. If I set my instruments well you will think it is live band when you hear the sound. I have full complement of musical instruments because I also play highlife music.

The multi-talented artiste did not stop there; he also produces costume for other cultural groups and makes local musical instruments. He also composes cultural music and teaches people dancing steps.

“I compose music myself and form new musical troupes that have not been in existence, arrange the music, teach the people the dancing steps they will use for it and it becomes a cultural group. In fact if you watch me dance you will empty your wallet appreciating me. Music is my talent and destiny.”

Though not a graduate, but Ibekwe said as long as he lives that all his children would be graduates unless anyone that chooses not to be. According to him, one of his sons; Ifenna, who plays with the band has graduated while his daughter is studying medicine at the University of Nigeria.

He described Igbo music as very meaningful and instructive adding that Ufie is the king of all traditional music. We have Aku-na-echenyi, Igba Ijele, Igbaeze, Okpanga, Odi and others but one thing that gives me joy in Ufie is that when it is time for it to be played, every other music will stop even if it’s Osadebe or Oliver de Coque that’s on stage; they must stop. The kingmakers will ensure that every other music stops for Ufie to play. So, Ufie is the king of all traditional music,” he declared.

One of his most exciting moments was when the Igwe of Ichida; Charlie Million was crowned. “We were eight Ufie music groups there. While the other seven were played, people complained that there was Ufie they had not heard, that there was Ufie that if Igwe heard he would be moved, then the Igwe asked his driver to go and bring this particular Ufie. At a point Ndi Ichie said we will be playing one after the other so that they can select the one they wanted. When I started playing, Igwe came down from upstairs and took with him a giant bottle of gin that had a stand and dropped it on my Ufie. He appreciated me with big amount of money including money his friends spread on him. From there he took me to where he was crowned that I should be the one that will cover it,” he narrated.

The father of 11 children from three different wives though one of them is late, said he runs away from women because they rush him much. He said he makes good money to keep his family happy adding, “You know this my music does not play in poor man’s house. It is also a saying that “Ufie adighi aku be ogbenye,” it only plays in rich men’s homes and whoever that does business with a rich man should be like him.”