2023 Presidency And The Search For The Igbo Leader 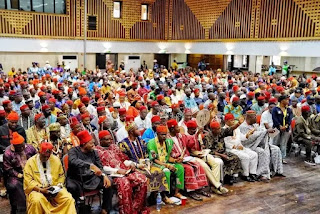 At the risk of being labelled ethnic jingoists, we have been searching for the leader of the over sixty million Igbo living in this entrapment called Nigeria, and the several million others scattered in all the continents across the globe. This has become necessary in view of the present state of the Igbo, not only in Nigeria, but worldwide.

In our search, we see that the Igbo are like sheep without a shepherd. They are like a ship without an anchor, rudderless. The Igbo no longer have any say in Nigeria. They grumble about marginalization, and about not getting their fair share in the scheme of things.

For the Igbo politicians, they do not seem to have a bearing. They are chattels, articles of trade, being tossed about. Some of them had even regretted ever standing with the Igbo in the past, which they said, had cost them fortunes. For that, they swore never to be with the Igbo again. With eyes on 2023, they decided to turn their backs on the people. But they now seem to have met their Waterloo!

In the meantime, it is either that Femi Fani Kayode, a Yoruba man, speaks for the Igbo, or that Nnamdi Kanu in faraway London, continues to be a lone voice crying in the wilderness. Every other person is dumb, afraid to speak.

We were told that the reason why the Igbo is in such a hopeless situation is because they are republican. “The Igbo have no king”, “Igbo enwe eze”. Every Igbo man is a king in his own right. Nobody is subservient to the other. The people will tell you: “Onye k’ibu?”,” Who are you?” “Esi be gi eje b’onye?”, “Does your house lead to anybody’s home?”

As far as we know, “Igbo were eze”, “Igbo have king”. But the Igbo king is not ready-made. He is not divinely ordained, thrust from the sky or propped by the spirit. The Igbo king is also not David, who was fetched from the field where he was tending his father’s sheep, and made a king.

Professor Cyril Onwumechili equates Igbo kingship to “scientific culture”, which recognizes “no kings and chiefs with divine knowledge”. In science as in Igbo, he says, “promotion is by achievement”. Since everybody has the right to attend and express his views in a scientific seminar, in Igbo village assembly, everybody has the freedom to express his views, and decisions arrived at by consensus.

Dr. Nnamdi Azikiwe became the Igbo leader even before a reception organized for him and his two other colleagues, Dr, Simeon Onwu and Dr. Akanu Ibiam, as first Igbo university graduates, by the Igbo Union in Lagos in 1934. Mr. Dennis Osadebay who was the first Igbo Union President, did not become the Igbo leader. It was Azikiwe, using his incisive pen and his chain of newspapers, with the West African Pilot as the flagship, that worked himself into the Igbo heart.

He took on the colonialists headlong and also championed the Igbo cause. This automatically made himself the Igbo leader. Azikiwe became the Igbo leader before becoming the leader of NCNC, and he took the Igbo along with him, to that political party.

When Azikiwe left to become the Governor General of Nigeria, he handed the baton over to Dr. Michael Okpara. Okpara did not fold his arms. He led the NCNC to form an alliance with a faction of the Action Group loyal to Chief Obafemi Awolowo, and the Aminu Kano led Northern Elements Peoples Union (NEPU), to form the United Progressives Grand Alliance (UPGA), which he used to consolidate the position of the Igbo in Nigeria. The Igbo then saw Okpara as their leader.

The circumstances of the 1966-1967 crisis forced on Chukwuemeka Odumegwu Ojukwu to carry the Igbo load. He carried it with every sense of responsibility. Ojukwu sacrificed everything to ensure that Igbo were not wiped out from the surface of the earth. This qualified him to become the Igbo leader.

When Dr. Alex Ekwueme was the Vice President of Nigeria, he was not particularly the toast of the Igbo. But when he went to the Constitutional Conference during the Abacha regime, he began to shine like a million star. It was to Ekwueme’s credit that we now have the present six geopolitical zonal arrangement. He followed it up by leading a group of progressive Nigerians, known as the G.20, which frontally confronted Abacha, and asked him to relinquish political power.

When Abacha died, the G.20 metamorphosed to the Peoples Democratic Party (PDP), with Ekwueme as their leader, and almost the entire Igbo followed him to the PDP. Even when the PDP denied Ekwueme a Presidential ticket, the Igbo still stuck with the party.

When Odumegwu Ojukwu pitched tent with the All Progressives Grand Alliance (APGA), he succeeded in snatching Anambra and Imo states from the PDP, and maintained a sizeable presence in many other states. APGA became the toast and the hope of the Igbo. But that hope was dashed as soon as Ojukwu departed.

Now, as we journey towards 2023, we begin to search who will lead the Igbo to the Promised Land? We look around, but do not see any. The Igbo are like orphans, no leader. Nobody wants to make sacrifices.

The Igbo have no political base. They are partyless. They are like tenants in the PDP, they have crashed APGA, and they are far away from the APC. Unless there is divine intervention, we do not see any future for the Igbo in 2023.