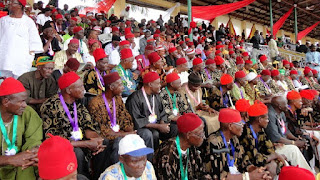 In a chat with DAILY POST, Ohanaeze’s Deputy spokesperson, Chuks Ibegbu insisted that those agitating for Biafra like the Indigenous People of Biafra, IPOB, can’t stop the push for Igbo presidency in 2023.

ACF Secretary-General, Anthony Sani, had warned that Nigerians would be scared to elect a President from the Southeast if they are seen to be agitating for secession from Nigeria.

Sani had stressed that Igbo people are suffering from what he termed “superiority and inferiority complexes.”

According to the ACF scribe, the Southeast was playing both victim and entitled, while cautioning them that “democracy is a contest of ideas and reason and is never a bullfight.”

Sani had said: “Igbos suffer from both superiority and inferiority complexes.

“At one point, they tout their superiority by claiming to be over and above any other nationality in Nigeria because they are better at the use of their superior commercial acumen for trade.

“At another, they play the victim by crying of marginalization the most. Power in a multi-party democracy is never secured through threats and intimidation, nor is it obtained by jeremiads out of pity.

“This is because democracy is a contest of ideas and reason and is never a bullfight.

“Igbos cannot agitate for separation and hanker for president by still expecting the country would not be scared of voting them for the presidency.

“Igbos may wish to recall that Senator McCain lost the elections because he had [Mrs Palin] who was governor of the state of Alaska. This was also because her husband was accused of attending a meeting of separatists who wish the state of Alaska to leave [the] USA and join Russia.

“I do not see how somebody from Scotland, Catalan, Quebec, Aceh or Xinjiang could dream of being voted president of their countries. Reason: Such a person would most likely play Gorbachev.”

“What Sani said has no meaning, its complete ‘brabadash.’ Boko Haram did not stop Buhari so those agitating for Biafra like IPOB can’t stop us from becoming President in 2023. I insist, 2023 is our turn to become president.”

On the issue of cabal in the presidency as admitted by President Muhammadu Buhari’s spokesperson, Garba Shehu, Ibegbu said: “You can’t stop cabal anywhere. Cabal can be found even in our houses.”
Daily Post Newsroom Ohanaeze Nd'Igbo Seun Opejobi