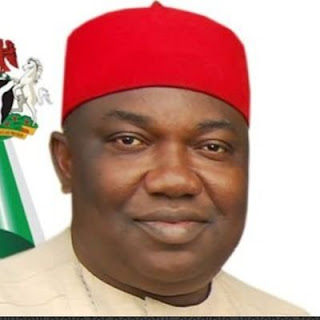 ENUGU (VANGUARD)--The Enugu State Executive Council (EXCO) yesterday awarded contracts for more infrastructural developments in the urban and rural areas, worth over N1.1 billion. This is in furtherance of the state government’s renewed vigour in providing democracy dividends to the people of the state.

It would be recalled that the state government in the last two months had awarded contracts for multiple development projects worth over N6.3 billion, which are ongoing.

Addressing newsmen after the meeting of the State Executive Council, yesterday, the Commissioner for Information, Nnanyelugo Chidi Aroh, disclosed that the Council directed the Head of Service and the State Civil Service Commission to immediately commence the processes for the recruitment of middle level and senior level cadre staff “to bring in sharp and fresh hands to strengthen the state’s public service, which is the driving force for the implementation of government policies”.

On the road projects awarded for construction and rehabilitation, Aroh further disclosed that the council granted approval for the construction of Phase III of Amokwe road in Udi Local Government Area starting from Udi Station through Ibuzo Amokwe to Amokwe Station road at the cost of N383,020,112.90. The Commissioner added that the Council awarded contract for the extension of St. Mary’s Catholic Church, Ezi Ukehe-Afia Four-Umurusi-Major General Ezugwu House-Umuoka Junction road in Igbo Etiti LGA at the cost of N153,208,045.16.

He stated that approval was also granted for the construction/rehabilitation of Ojoto Crescent, Trans Ekulu, Enugu at the cost of N153,208,045.16.

On public buildings, Aroh stated that the Council approved the requests from the state Ministry of Works and Infrastructure for the construction of perimeter fence for the five fire service stations in the state that were newly constructed by Gov. Ifeanyi Ugwuanyi’s administration as well as the perimeter fence, retaining walls and gate houses at Diamond City Estate, GRA, Enugu, at the sum cost of N69,208,006.34.

He further stated that the requests for supply and installation of single-arm smart integrated solar powered street lights (80 watts) and solar powered borehole for the five (5) new fire service stations were equally approved.

In line with the state government’s commitment to improve water supply in the state, Aroh revealed that the EXCO approved the advertisement for immediate rehabilitation of the 9th mile borehole project and construction of fresh boreholes in Nsukka and Obollo-Afor to enhance the supply of water to people of the state.

On healthy living, the Commissioner said that EXCO directed the Ministry of Agriculture to immediately advertise for a Consultant to handle the technical processes for the construction of abattoirs in the state to ensure safety of meat consumption.

He added that the Council called for “total reorganization of the Ministry of Health” which will include recruitment of new staff, consultants, nurses and other critical health personnel to enhance effective delivery of services in the health sector in the state.

Aroh maintained that the EXCO also approved the setting up of monitoring and evaluation team to evaluate and monitor the implementation of the 2020 budget in keeping with the state government’s commitment to accountability, transparency and fiscal responsibility.