I Will Respect Independence Of Imo Judiciary ― Ihedioha 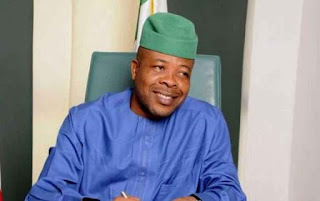 OWERRI, IMO STATE (VANGUARD)--Governor Emeka Ihedioha of Imo State, weekend, reiterated his campaign promise to “respect and uphold the independence of the State Judiciary”. Ihedioha, who stated this when he swore-in nine new Judges in Owerri, also reassured the citizenry that his administration would religiously stick to the rule of law.

“It is not in doubt that the twin factors of Independence of the Judiciary and full observance of the rule of law, are the panacea for good governance. This administration will observe and respect all of them”, Ihedioha said. While saying that “the three arms of government must coexist as separate organs of government independently, but collaboratively,”

Ihedioha equally disclosed that his administration has maintained a symbiotic relationship with other arms of government, assuring that plans were in top gear, to enhance the status of the judicial system in the State after several years of palpable neglect. “We have reconstituted the Judicial Service Commission. We have started the renovation of the Judges Quarters. We have also ensured payment of salaries and allowances of Judges as at when due and provided official guards for them”, Ihedioha said. He explained that his administration achieved these feats within a short period of time, despite the prevailing financial constraints. The Governor revealed that, of the 33 Judges recommended for an appointment across the federation by the National Judicial Council, NJC, nine Judges, the highest, was approved for Imo State. “The NJC approved nine Judges for Imo State, which is the highest, trailed by Rivers State, which got approval for four Judges. This is a testimony of our unwavering resolve to entrenching the tenets of rule of law in our State, which can be achieved with an efficient and formidable judiciary”, Ihedioha said.

He recalled steps taken by his administration on assumption of office to boost the State judiciary, which led to the appointment of magistrates, Inspectors of Court, bailiffs and other judicial staff. While noting that these measures were taken to ensure an effective justice delivery system in the State, the Governor advised the new Judges to discharge their duties fairly and ensure they do justice to all manner of people without fear or favour. Speaking earlier, the Chief Judge of Imo State, Justice Paschal Nnadi, said “Governor Emeka Ihedioha has revitalized the Judiciary in the State, and this has translated to numerous gains to the judicial system, including expeditious handling of cases”, Justice Nnadi said. He expressed gratitude to the Governor for “rejuvenating the judiciary and assured that the judiciary in the State, will continue to serve justice to all”. Justice Ihuoma Grace Chukwunyere, who spoke on behalf of the newly inaugurated Judges, assured that they will uphold the law at all times.
Chidi Nkwopara Emeka Ihedioha Newsroom Vanguard