A Reason To Separate The Igbo From Nigeria 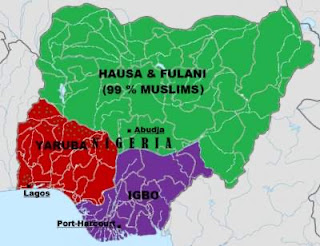 Right from the onset, it may be necessary to make this point clear: That Nigeria is a genocidal state. We need to have that in mind while responding to the question of whether the Igbo should continue to maintain their stake as partners in the colonial union known as Nigeria. Throughout history and in all regions of the world where there has been genuine and honest response to genocides, separation has always been the only sensible response. At the end of the crime, the victims are usually removed far away from the perpetrators. That is the only solution that permanently prevents future occurrences of the atrocities of genocide in any society where it has taken place.

While the people are saying “Never Again,” the only reliable guarantee that is capable of safeguarding such a promise is the shield and assurances that sovereign independent international boundaries provide for a persecuted people like the Igbo. The truth is that while you try as much as possible to keep fires away from gunpowder, you should also make efforts to keep gunpowder away from fires.

Here following, we will name a few of the victims of genocides in the past who of necessity had to be separated from the perpetrators in order to ensure that the victims do not suffer the same fate in the future. Some time ago in 2016, in the midst of threats from the Turkish government which perpetrated the crime, German legislators officially recognized the Armenian Genocide as such. The United States Congress, despite protests from the Turkish government has also officially recognized the Armenian genocide.

Soon after the Turkish Ottoman Empire committed the genocide of the Armenians in 1915 with the massacre of 1.5 million Armenians, the Armenian people had to separate themselves into an independent country of Armenia with the administrative capital in Yerevan.

After the German Nazis committed the genocide of the Jews in Germany and the rest of Europe in which 6 million Jews were massacred, the victims had to separate themselves far away from the perpetrators. This Jewish Genocide is known widely as the Holocaust. The genocide ended in 1945 and the Jews established an independent state of Israel in the Middle East in 1948.

It is the accusation of genocides that led to the breaking up of the countries that made up the former united country of Yugoslavia.

The genocide of the East Pakistanis by the government of West Pakistan led to the separation of the two formerly united country, where the East became Bangladesh. The list goes on.

The genocide such as the one that took place in Nigeria against the Igbo is an institutional genocide. Most genocides are institutional crimes, anyway. In most cases it is only states that have the capacity to muster such elaborate machineries usually required to carry out such great massacres. The government as well as the other peoples of Nigeria committed the genocide of Biafrans between 1966 and 1970 in which 3.5 million Biafrans were killed. Igbo made up 3.1 of the 3.5 million who died in that genocide.

The root cause of the Igbo Genocide in Nigeria is hatred. Therefore, the hatred that produced the act is institutional and not merely individuals’. The Nigerian state as an institution is the primary source of the prevailing Nigerians’ hatred of the Igbo. Because its source resides in the institution of the federal republic of Nigeria, it will be near impossible to uproot this hatred from the Nigerian society. It will be near impossible to create a lasting atmosphere in the Nigerian society where the Igbo will be eventually accepted and allowed to exist side by side with the other Nigerians in the spirit of true brotherhood.

Institutions run as continuums therefore their established policies, customs, norm and culture such as the society-wide hatred of the Igbo, run from one generation to the next. Agreements, armistices and promises such as “Never Again,” “No victors and no vanquished” and other similar lofty pledges, when they are genuinely made, can only hold for a while in genocidal societies like Nigeria. Eventually there will always emerge the biblical Pharaoh who did not know Joseph. And once such Pharaohs arrive in power, the vicious cycle resumes and genocide repeats itself.

It is in the light of the above truth that we know that the only real permanent solution that will prevent any future genocides of the Igbo in Nigeria is for the Igbo to be separated from Nigeria into a sovereign independent Igbo country or state.