Nigerian Jews And The Dream Of Their Own State 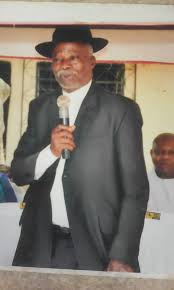 Nisach Bai Ephraim is shy. "I'm married here in the state of Imo and have a child. I'm in my early 30s and a housewife," she says slowly. In the small room next to the Owerri synagogue, a large fan hums, the noise of which keeps swallowing her voice. At noon, the humid, humid air in southeastern Nigeria is almost unbearable. The young woman only thaws when she talks about her belief. Judaism is wonderful: "This religion is the truth. I am very proud of my faith."

Nisach Bai Ephraim grew up in the neighboring state of Aba, where the vast majority are committed to Christianity. As a child, she therefore knew the feeling of being different, of not going to church on Sundays, of having no communion or confirmation celebrations. However, that was not a problem. "Everyone knew that I was Jewish. I grew up with it."

This is an exception in Nigeria. Synagogues have only been in existence in the south-east of the 200 million-inhabitant country for around 30 years. The northernmost are in the capital, Abuja, and a few have also been built in the metropolis of Lagos. Religion plays a crucial role in the country, and discussions about whether there are more Christians or more Muslims are part of everyday life and are always used politically.
"Lost Tribe of Israel"

At some point in the early 1980s, Hagadol Ephraim Uba could not do anything with it. Until he converted to Judaism, he was a Christian preacher himself. Today he is the chairman of the Association of Jewish Faith in Owerri. However, the fact that more and more people are committed to Judaism is not a trend, but rather a return. "We are the lost tribe of Israel. Moses should lead us to the promised land."

How many Jews there are in Nigeria is not clear. Some speak of 30,000, in Jewish circles the number of three million sometimes drops. However, they are not recognized by the Israeli state. On the African continent these have been the Beta Israel from Ethiopia since 1975. There are also Jewish communities in South Africa. In Nigeria, Ghana, Cameroon and Rwanda, many people are waiting in vain for official recognition.

Whoever is not a child of a Jewish mother needs the Giur, the conversion. This requires several years of preparation with a subsequent examination before a rabbinical court. Praying in Hebrew and celebrating worship on Saturday the Sabbath is not enough. Recognition also includes the right to emigrate to Israel. This is made possible by the law on returnees passed in 1950.
Aid from the United States

Support comes instead from the United States. For example, the Kulanu organization based in New York motivates small Jewish communities around the world. It helps build networks and creates contacts worldwide.

For Hagadol Ephraim Uba there are numerous parallels between Israel and the southeast of Nigeria. "Israel is hated by the world, just like we are." In the Owerri synagogue, the parishioners have something else in common: they are all Igbo. With 30 to 40 million people, this is one of the largest ethnic groups in the country, which fought for its independence during the Biafra War from 1967 to 1970.

Voting on the Sabbath

To this day, the dream of having a state of one's own is great, because many feel disadvantaged by the Nigerian central government. This also applies to religion for the Jews of Owerri. "Unlike Christians and Muslims, we don't get any support from the state. Also in Nigeria elections are held on the Sabbath, Saturday," says Hagadol Ephraim Uba. Being Jewish is therefore also a political statement and above all a criticism of the government. (Katrin Gänsler from Owerri, February 20, 2020)
Essay Igbo Jews Nigeria