The Example Of Enyi Abaribe 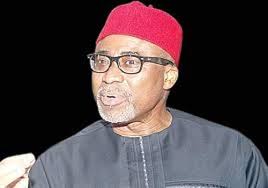 Courage is the word that first comes to mind as you contemplate the phenomenon and exciting trajectory of Enyinnaya Harcourt Abaribe, senator representing Abia South in the National Assembly. Courage came to mind as he spoke with love in his heart for his people on Friday, February 14, 2020. The event was the final obsequies for Eze Israel and Lolo Ugoeze Sally Kanu, parents of the leader of IPOB, Nnamdi Kanu.

Abaribe led a star cast of outstanding Igbo politicians that showed up bravely to identify with Nnamdi Kanu in the best exemplification of Igbo culture. Ndigbo end all wars, disagreements and quarrels in the face of death. Death is the price all men must pay, so our people see it as final and deserving of love to the survivors and respect to the departed.

I join in the salutations to Peter Obi, former Governor of Anambra State, Victor Umeh, Tony Ukasoanya, Empire Kanu, Uchenna Madu of MASSOB and all those high visibility persons who mourned with Nnamdi. Well done, Nzuko Umunna. Governors of the five states of Abia, Anambra, Ebonyi, Enugu and Imo – victims of the cruellest vilification of IPOB- could not find the moral courage nor respect Igbo tradition to be part of the event. Governor Okezie Ikpeazu fixed the roads as a diligent host ahead of the funeral.

Enyi Abaribe stood up for the count as surety for Nnamdi Kanu when it seemed suicidal. Kanu, of course, went on to disregard the terms of his court agreement to the discomfort of the Senator. Presidential spokesman Garba Shehu deployed Kanu’s misbehaviour in his tirade against Abaribe only recently. Yet here was the man standing to represent his people at the funeral.

Such display of courage has marked the trajectory of Enyi Abaribe, the politician and Enyi, the man who stands by his friends through thick and thin, over the years. This 4th Republic commenced in 1999 with Abaribe as Deputy Governor to Orji Uzor Kalu. They soon fell out on principle. Abaribe would not compromise but chose the courageous path.

Twice the Abia State House of Assembly sought to impeach him in 2000, setting the building blocks for the shameful practice of houses of assembly doing a fool’s errand for governors. Ahead of their third attempt in 2003, Abaribe sent in his resignation by courier. He suffered a denial of benefits and perquisites of office, discouragement, and abuse for his stand.

He was the victim of the combined efforts of Governor Orji Uzor Kalu and his then Chief of Staff Theodore Ahamaefula Orji to bring him down and end his political career in disgrace. In 2007, Abaribe bounced back as a Senator, a seat he has occupied since then with repeated victories at the polls. His traducers then sought places in the Senate after doing so much damage to Abia State for a combined 16 years and earning their seats in the Evil Forest. Recent events must sound like justification. Ndi Abia watched in disbelief as they all took photos in the Senate chambers with the man, they sought to destroy many years earlier.

Enyi Abaribe has earned his honorifics. Ndigbo hail him as Mma Agha, the battle-axe. Others call him Otuonu after the movement he led for equity in Abia State. He is at the frontline in all matters concerning the Igbo and speaks without equivocation. He takes on pitched battles against an imperial presidency that seeks to portray as the act of an infidel any criticism of President Muhammadu Buhari. Many have retreated into silence even in the protected chambers but not so Enyi Abaribe. He represents in High Fidelity the idea of a Senator as a person who brings wisdom, courage and deliberation to matters for the benefit of society. Members of the Ime Obi, as the Igbo would call a place such as the Senate, ought to be fearless and bring vast experience and knowledge to their tasks.

We need more examples such as Enyi Abaribe in the South East, men of fortitude who can stand for their people as Nigeria travails under President Muhammadu Buhari. Steady hands, clear heads and courage are desiderata

Abaribe, an Old Umuahian, also brings training as an economist and private sector manager to bear in his contributions. Behind his gentle exterior is an inner core of steel and breeding. I stuck my neck out when Richard Ikiebe was to launch Voices Beyond the Newsroom by suggesting we invite the then Chairman of the Senate Committee on the Media. I reached out to him through my childhood pal and his trusted aide Uchenna Awom. A few days later, we got word that he would attend the event. On the appointed day, Enyi Abaribe flew into Lagos to honour his commitment. There was the additional reason of knowing Dr Ikiebe from many years in the past.

Courage is the choice or willingness to confront agony, pain, danger, uncertainty or intimidation. Moral rather than physical courage is the virtue best associated with man and speaks to the ability to act rightly in the face of widespread opposition, shame, scandal, discouragement or personal loss. Courage shows in the most challenging times as the Igbo philosophy recognises that mberede ka eji ama nwoke (Difficult situations reveals the character of the man).

We need more examples such as Enyi Abaribe in the South East, men of fortitude who can stand for their people as Nigeria travails under President Muhammadu Buhari. Steady hands, clear heads and courage are desiderata. Beyond crying at the shame unfolding before us, it is crucial to recognise exemplars such as Enyi Abaribe. Ji de nke ijei, Mma Agha. Salutations.
Chido Nwakanma Enyinnaya Abaribe Essay Igbo Politics