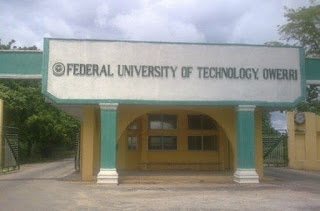 The institution’s Vice-Chancellor, VC, Professor Francis Eze, who disclosed this weekend, while addressing parents guardians and the 4,841 matriculating students of FUTO, also announced that the project has already received a boost.

“This initiative of turning waste to wealth, received a major boost last week, when the University signed a memorandum of Understanding with the Nigerian Agip Oil Company Limited, on reclamation and recycling of plastic wastes”, Eze said.

He was optimistic that the collaboration would deepen the University’s waste recycling programme, especially in their current effort to generate electricity from heterogeneous waste.

His words: “As we pat ourselves on the back for the appreciable progress of our University, a lot still needs to be done in the area of provision of facilities and infrastructural development.

“On our part as the University Management, we have ensured the provision of facilities within the limit of available resources needed for teaching and the overall wellbeing of our students.”

The VC lamented that “insufficient funds have adversely affected our ability to upgrade facilities and implement some of our novel ideas.”

Professor Eze said that extortion of students, sexual harassment and sale of grades, is highly prohibited, as any staff found culpable, would be sanctioned, in line with our regulations, adding that “to demonstrate FUTO’s commitment to the fight against sexual harassment, the Governing Council has approved the University Sexual Harassment Policy, which is aimed at discouraging any form of unhealthy sexual relationship between staff and students.”

The VC warned the fresh students that the University often wields the big stick to sanction students convicted of examination malpractices, robbery and cult activities, either through outright expulsion or rustication for one or two academic sessions.

“Currently, some students, who were found culpable of various offences, have been expelled from the University, while others are serving punishment of rustication. I plead with you, to avoid acts and behaviour that could terminate this golden opportunity you have, as a student of this University”, the VC cautioned the new students.
Chidi Nkwopara Imo State Owerri Vanguard