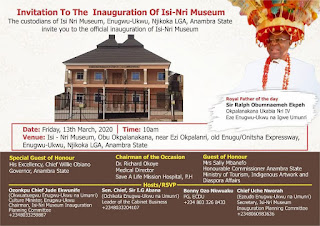 ENUGWU-UKWU (THIS DAY LIVE)--On March 13 2020, all roads led to Enugwu-Ukwu, the paternal head of Umunri clan for the official opening of Isi Nri Museum. The Museum is located at Obu Okpalanakana in Uruekwo village, Enugwu-Ukwu. The opening of the Museum was performed by Governor Willie Obiano of Anambra State and it attracted the cream of Nigerian Society from far and near.

Some historians have traced the origin of Umunri clan to Israel many centuries ago, to a man called Eri, who was the fifth son of Gad, who, in turn, was the seventh son of the biblical Jacob. Nri Kingdom is the oldest kingdom in Nigeria. It was founded around 900 AD, by the progenitor Eri, the son of Gad. According to biblical accounts, Jacob had Leah as his wife, who begot four sons for him. When Leah noticed that she had passed child bearing age, she gave her maid, Zilpah to Jacob to wife and through Zilpah, Jacob had a son (among others) named Gad. Gad then begot Eri, who later formed a Clan known as Erites, as recorded in Genesis chapter thirty, verse nine and chapter forty-six verse sixteen (30:9 and chapter 46:16), as well as in Numbers chapter twenty-six from verse fifteen to eighteen (26:15-18). Eri was therefore among the twelve (12) tribes of Israel through Gad.

During their stay in Egypt, Eri became the high priest and spiritual adviser to Pharaoh Teti, the 5th dynastic king of Egypt around 2400 BC. During the Exodus, which marked the beginning of mass movement of the tribes of Israel, the tribe of Eri was among the tribes that left Egypt following the injunction from God to the Israelites as recorded in Deuteronomy chapter twenty-eight from verse fifty eight to sixty eight (Deut. 28:58-68).

When Nri, one of the sons of Eri came of age and discovered that he was endowed with enormous spiritual powers, he decided to migrate to establish his own domain and moved from where his father, Eri lived at Obu Gad in Otutunzu Aguleri at the confluence of Ezu and Anambra Rivers and followed the Ezu River bank until he got to Amanuke in the present Awka North Local Government Area. He spent some time in Anamuke before he moved further and arrived at Nkpume Onyilienyi, a massive progenitor rock at the present UgwuAwovu Village in Enugwu-Ukwu, where one mast of Anambra Broadcasting Station’s transmitting station is currently located. It is also in this vicinity that Nri had his five sons, with Okpalanakana-UkabiaNri, the father of Enugwu-Ukwu as the first son, followed by Okpalariam, the father of Nawfia; Okpala Aguiyi, the father of Enugwu-Agidi, Oruora who died without a son during inter communal war and then Ifikuanim, the father of Agukwu-Nri and Akankpisi.

Nri also had one daughter Iguedo who got married and gave birth to many children including Awkuzu, Nando, Umueri, Ogbunike etc., generally referred to as UmuIguedo. In search of more conducive area of settlement, Nri located a lake at Diodo at the present Agukwu-Nri. He then moved with his last son, Ifukuanim, close to the lake while his first son Okpalanakana and his other brothers remained at Nkpume Onyilenyi in Enugwu-Ukwu. It was from here that the two other brothers of Okpalanakana migrated, first Okpala Aguiyi moved and founded the present Enugwu-Agidi and Okpalariam founded the present Nawfia.

Inspite of this migration and dispersal, the Nri children had continued to maintain cultural affinity. For instance, in those days, the death and burial of any Nze title holder in Umunri would attract all the Nri children who would gather to perform the burial rites.
Again, the present Nkwo Enugwu-Ukwu which was then called Nkwo Nshi was named by Nri himself, provided designated sections for each linage at Umunri where they did their enterprise on Nkwo market days.

It will be recalled that in those days, major rituals activities in Umunri clan were conducted at Obu Okpalanakana. Some erudite scholars like Professor M.A Onwuejogwu, IK. Ogbukagu, Dr Ifeanyi Okafor, Rev. Fr. R.A Arazu and others in their research work on the history of Nri kingdom have acclaimed Okpalanakana, the progenitor Enugwu-Ukwu, as Okpala Umunri.

Igwe Ralph Obumneme Ekpeh, Eze-Enugwu Ukwu na Igwe Umunri since his ascension to the throne ten (10) years ago has been making concerted efforts to quicken the unity of Nri people scattered all over Igbo land and beyond. This will start with the unity of the core Nri people of Enugwu-Ukwu Nawfia, Enugwu Agidi, Agu-Ukwu and Akankpisi. We will then extend our relationship to other Nri descendants including Dunukofia, represented by Ukpo, Amawbia, Enugwu-Ezike, Adazi Enu, Oraeri, Ogboli Ibusa, OgwashiUku, Awka, Nibo, Amesi,Akweze, Umuawulu, Nise, EnugwuAborUfuma, to mention but a few. For example there is in Uruekwo village Enugwu-Ukwu today the OfeEzike section from where the Enugu Ezike people in the present Enugu State migrated.

Recently, the Igwe-in-council and the Enugwu-Ukwu Community Development Union (ECDU) instituted the Umunri colloquium as part of the annual Iguaro of His Majesty Igwe Sir Ralph Ekpeh, Eze Enugwu-Ukwu na Igwe Umunri. The Umunri colloquium, a high powered intellectual and cultural discourse, brings the four sons of Nri clan into the planning, execution and participation of the event. Enugwu-Ukwu, the first son of Nri, has also built a magnificent Museum at Obu Okpalanakana. It is at this Obu, which is located at the present Uruekwo village Enugwu-Ukwuthat he settled and had eighteen male children through whom eighteen villages were established in Enugwu-Ukwu.

The Museum is expected to house artifacts and monuments that will help recreate the unique and mystic nature of Nri, through its hegemony that has spread to many parts of Nigeria. This is in addition to housing a conference centre and a library. It is important to inform Ndigbo that the significance of Enugwu-Ukwu, the first son of Okpalanakana as the head of Umunri Clan has been reflected in the fact that in 1958 late Igwe Ositan Agwuna was crowned Eze Enugwu-Ukwu. Soon after, in 1960 the traditional rulers of Umunri clan: Enugwu-Ukwu, Nawfia Enugwu Agidi and Agu Ukwu gathered at the Umunri Court Hall in Enugwu-Ukwu and unanimously elected Osita Agwuna as the Igwe of Umunri. This ceremony marked the beginning of traditional rulers of communities in Igbo land taking the title of Igwe. There was none before then.

This historic event is recorded in the Archives of the Eastern Region of Nigeria.

As the Isi Nri Museum is formally declared open tGovernor Obiano, another great son of Eri, the Enugwu Ukwu Community, traditional head of Umunri Clan pledges its willingness to avail all visitors to the historic town and Isi Nri Museum the traditional blessings of Nri our progenitor including our enduring rich customs, culture and tradition. The most significant tenet of these is that all men are born free and equal. Individual growth in the society is by personal achievement. There is nothing like slavery or Osu caste system in Umunri clan; whoever and wherever it is practiced elsewhere should come to Umunri Clan and be cleansed.