Police Brutality And The Rest Of Us 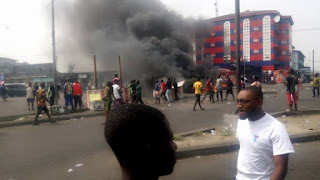 People protest at the Ikoku Spare Parts Market, Mile 2, Diobu, Port Harcourt, accusing the police in Rivers State for the death of Chima Ikwunado who died from his injuries while in custody of the Eagles Crack Squad, a police unit in Port Harcourt stationed in Mile One. Image via BBC

On December 23 last year, Chima Ikwunado, an automobile mechanic based in Port Harcourt, Rivers State, died in the custody of the Nigerian Police few days after he was apprehended by the police who whisked him away alongside four other colleagues after they reportedly failed to meet “bribe” demanded from them. Chima was allegedly killed by some policemen, after undergoing “severe torture in their custody”.

Victor Ogbonna, one of the victims arrested alongside the deceased, said “They tortured Chima, broke his legs and Chima died in pain. They (police) hung Chima in the air for two hours and went on patrol, only to return afterwards to lose him. By then, he merely fell down like a cocoyam, already dead,” “So, they took him inside their vehicle and drove off. Chima died on December 23, according to what the boys told me.”

The case of Chima is one out of the avalanche of incidents of torture and ill-treatment of suspects held in the custody of the police. Victims and witnesses have disclosed at several fora that the forms of torture and other ill-treatment committed by the police included the tying of arms and legs tightly behind the body, suspension by hands and legs from the ceiling or a pole, repeated and severe beatings with metal or wooden objects (including planks of wood, iron bars, and cable wire), resting of concrete blocks on the arms and back while suspended, spraying of tear gas on the face and eyes, rape of and other sexual violence against female detainees, use of pliers or electric shocks on the penis, shooting on the foot or leg, stoning, death threats, slapping and kicking with hands and boots and denial of food and water.

A 23-three year-old man who was arrested by the police in Enugu described his mal-treatment to Human Rights Watch thus: “They handcuffed me and tied me with my hands behind my knees, a wooden rod behind my knees, and hung me from hooks on the wall, like goal posts. Then, they started beating me. They got a broomstick hair [bristle] and inserted it into my penis until there was blood coming out. Then, they put tear gas powder in a cloth and tied it round my eyes. They said they were going to shoot me unless I admitted I was the robber. This went on for four hours.”

In another account, a 36-year-old trader who was detained at the Kano police headquarters told researchers: “Our arms were tied with handcuffs. One at a time we were hung by a chain from the ceiling fan hook. I was the first. They started beating me with a yam pounder, saying I should confess for the robbery. I didn’t know what they were talking about. I was beaten, beaten, beaten. They beat my knees, the soles of my feet, my back and my joints. This went on for 25 minutes. I was beaten too much. I shit and piss while I was hanging. Then, I became unconscious.”

One factor is clear, The Police disregard for due process of law, which fuels the abuse of power, is characteristic to all the cases. Amongst the main concerns are deliberate practice of not informing suspects of the reasons for their arrest, lack of legal representation, prolonged pre-trial detention and acceptance by Magistrates and Judges of confessions that were extracted under torture.

Impunity among men of the Nigerian Police is one of the biggest single obstacles to the reduction of torture and other serious abuses by the police in Nigeria. Deeply engrained societal attitudes that accept police torture and other abuses as legitimate tools to combat crime help sustain this impunity. For many Nigerians who have experienced decades of oppression and brutality by military rulers, the use of violence by the institutions of the state is often accepted, even seen as normal.

Even when they know the police action is wrong, indeed illegal, the victims seem utterly powerless to seek redress. The fact that in all but a handful of cases, there was no accountability for violations committed by the individual police officer, no doubt embolden the perpetrators and has perpetuated the culture of violence in the Nigerian Police Force. Also, victims of police torture who attempt to attain accountability face numerous obstacles.

Official channels for registering complaints, such as the Police Complaints Bureau and the National Human Rights Commission, are acutely under-resourced and lack political support. In addition, the failure to carry out legally required inquests and autopsies on suspects who died in custody further impedes accountability. In the unlikely event that a legal case is brought against an officer, obstruction or lack of co-operation from the police and connivance with the lower cadres of the judiciary ensure that prosecution is rare.

National efforts to reform the police have, to date, been largely symbolic and consistently failed to prioritise human rights issues, including torture. An ambitious new program, launched by the Inspector General of Police, which offered some hope that more comprehensive and meaningful reform is at last being considered has not yielded the desired result.

A review of the Police Act will certainly be a welcome opportunity to bring the laws governing the police into line with international standards, particularly the inclusion of a code of conduct that specifically prohibits the use of torture. However, whether the police leadership can rise to the challenge and contest the many vested interests opposing change – both from inside the police force and in the wider environment – squarely lies with President Muhammadu Buhari.

The international community, in particular the British and United States governments, both of whom have since 1999 invested millions of dollars into developing the Nigerian Police Force, must also take a stronger stance to pressure the Nigerian government to bring about an end to the torture of detainees, address impunity for police abuses and bring about genuine reforms.

Both governments have repeatedly assured human rights propagators that they are voicing concerns about human rights issues with the Nigerian authorities. However, this approach has proven to be largely ineffective as police abuses, including routine torture, persist.

Therefore, the British and the U.S. governments should at the very least condition continue the financial assistance, equipment and training they provide to the Nigerian police. Also, the British and U.S. governments should come forth to publicly denounce torture and killings by the Nigerian Police Force.
Amieyeofori Ibim Essay Igboland Port Harcourt