Igbo Landing Legacy To Get Historical Recognition On Island 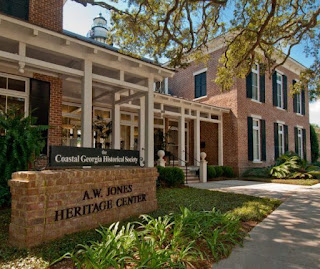 An African-American legend grounded in fact tells how members of the Igbo tribe drowned themselves in the inland waters off St. Simons Island more than two centuries ago rather than face a life of enslavement.

This tale of redemption in the face of bondage survived in the oral tradition for generations before historians lent it credence, but soon the Igbo Landing legacy will hold a place of permanence on St. Simons Island.

The Coastal Georgia Historical Society announced this week that a roadside marker will go up to commemorate that historic moment in 1803 near Dunbar Creek.

The Georgia Historical Society marker will go up near the intersection of Frederica Road and Sea Island Causeway at the Old Stables Corner lot preserved by the St. Simons Land Trust.

The marker came about through the efforts of high school students from Glynn Academy’s Ethnology Club, according to the Coastal Georgia Historical Society. Intrigued by Igbo (pronounced Ebo) Landing’s enduring legacy of freedom at all costs, the Glynn Academy students researched the tale’s history and applied to the state historical society for the marker.

Numerous historical markers line the island’s roadways, marking everything from the 1742 Battle of Gullyhole Creek to the military trail that is now Demere Road.

“We’re proud that the students of Glynn Academy chose to apply for a historical marker and that they chose such an important event in history to highlight,” said Sandy White, education director for the Coastal Georgia Historical Society. “The club’s detailed research and well written application that accurately reflected the written record and the cultural traditions of the Gullah Geechee peoples led to a successful outcome, including a matching grant of $2,500 from the Georgia Historical Society.”

In May 1803, captured members from the Igbo tribe in present-day Nigeria were bound from Savannah to St. Simons Island aboard the Morovia for a life of enslavement. They revolted, and three crewmen of the ship went overboard to their deaths.

The Morovia came ashore somewhere near Dunbar Creek. There, it is said, anywhere from 10 to 13 members of the tribe walked in chains as one into the water and drowned themselves rather than face a life of slavery.

Roswell King, a white overseer at the Butler Plantation, told of witnessing the tribal members as they “took to the swamp” and drowned, according to New Georgia Encyclopedia.

Retold in African American communities throughout the region for generations, the sacrifice for freedom became a tale of salvation over death. As tradition holds, they walked into the water chanting, “The water spirit brought us, the water spirit will take us home.”

In other retellings of Igbo Landing, their souls took flight and returned home.

Many scholars point to Igbo Landing as the historical source for the “Flying African” stories, mystical tales of human flight that represented rising above brutal oppression and bondage.

Traditionally, African Americans recognize the event as taking place on Dunbar Creek near privately-held land on Atlantic Avenue. The Old Stables location provided a more public location for the marker.

In July 2017, Igbo tribal leaders from Atlanta to Nigeria gathered on the banks of Dunbar Creek at the Atlantic Avenue site for a ceremony to consecrate the grounds and break bread with old family members.

“It is with great elation and gratitude that the entire Igbo community worldwide receives the news of the announcement of the Coastal Georgia Historical Society that it will recognize the brave, courageous and ultimate sacrifice of our Igbo ancestors,” said Bobby Aniekwu, an Atlanta area attorney and Igbo chieftain. “The courageous action of those brave Igbo ancestors is now generally recognized as the first documented slavery resistance in United States.”

“We’re excited to be a part of the Igbo Landing marker,” Roberts said.

“We had never done this before so we were learning as we went along,” said Glynn Academy senior and Ethnology Club President Rachael Walters. “I am so happy the club is part of the first marker application in Glynn Academy history.”