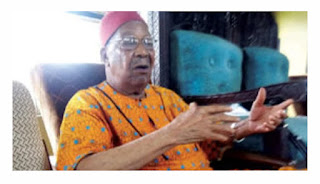 He spoke with journalists on his recent visit to President Muhammadu Buhari with some Igbo leaders, the militarization of Southeast and the quest for Nigeria president of Igbo extraction in 2023, among other issues. Excerpt:

You led some Igbo leaders to see President Buhari recently. Can you tell us some of the major reasons for the visit?

A few days ago, I led a small delegation of Igbo leaders to meet the President of Nigeria on the growing tempo of violence in Nigeria especially in the Southeast. The president was happy to receive our delegation, and our discussions were frank, sincere and all targeted at advancing peace and full reconciliation and we are expecting a positive result.

What is your mission in Ebonyi?

I have come to Ebonyi State to greet the governor who is the Chairman of the South East Governors Forum, and seek their support in our efforts to find peace. I am deeply worried and pained by the new spate of violence between some policemen and civilians who were said to have been killed and I am appealing to all who may be involved in these crimes to please seize violence and give peace a chance. Whether they are of IPOB or MASSOB or known or unknown gunmen or agents of any organ or personality should please stop it now. You can never achieve peace or reconciliation through violence. As the only surviving minister and member of the government of the First Republic I appeal to all to please respect my age and help me to make peace , before returning to my maker. I want to comment on the new spate of violence. I am trying to bring peace and freedom to Igbo land. You people are young elements , you don’t know what pleasant place our place was before, we grew up at a very difficult time , at a strange time where there is no food, no money , nothing and your money have no value again and everything has been destroyed and we are trying to bring back that peace. Today, in Igbo land, from Abakaliki to Enugu , I know it is used to be about 35 minutes drive , but now if you have no escort, it will take you about an hour or two because on the roads there are checkpoints upon checkpoints. In our own side, Anambra, Imo and Abia, you need to see what is happening there. People are travelling, they are made to come down, all passengers in a lorry or a bus, men, women, children. Women who are pregnant, women who carry children at their back, they are made to raise their hands above their head. This is not a free country. So, these are the things I want to stop. And I want to stop the killings, I have the capability of saying it, one of the discussions I had with the president last week, was the safety of Nnamdi Kanu detention and the whole situations and how it should be handled, how to reconcile the Igbo side of this country who were the leadership of the struggle for independence and creation of the country and to reconcile them with the rest of the country. We have been isolated since the war ended, we are not given responsible positions in the country, the economy has been destroyed, the only seaport at Port Harcourt is closed because it was close to the Igbo. Our traders order their goods and they arrive at Lagos and from Lagos , to Abakaliki or to Onitsha. The customs molest them on the road and take more of the profits they will make in the business . People are suffering now, you people are in hell now. In Ebonyi State, I don’t know why they had to allow the Nkalagu cement factory to die. Nkalagu cement is the only major industry in Ebonyi State so far. And it was the major thing that sustained us during our time and at that time , if you pay N200, at Nkalagu cement they will deliver to you one lorry load of cement, 200 bags of cement anywhere in the eastern part of Nigeria. Today, that place is closed, it must be re-opened . I have seen the wonderful thing that the governor is doing here, I have seen the development here, but the next phase will be to put an industry here .I am not dying tomorrow, I am 93 years old ,I will live and see this development and you people will live and see it and grow with it.

Giving how the country is going especially the treatment being meted to the Igbo,what message do you have for the Igbo youths?

Well, my message at the moment, particularly when the Igbo are at the receiving side , is for the Igbo to use that Igbo sense , silence is golden . You see there is one weakness Igbo people have, what you will do tomorrow; you say it today. I will do this tomorrow, if you do it tomorrow it is no longer news , if you don’t do it tomorrow the shame is yours . So the best thing is for them to use their sense. Let us work silently. God has given the Igbo land the blessings of men, women and children who are hardworking and self-reliant and education is very high in our place, so with proper management and discipline, with proper planning we will succeed. We will come back to the original position of the Igbo in Nigeria.

Some people are saying that you went to Abuja to discuss with the president on how to release Nnamdi Kanu , but failed to discuss the main issue of marginalization which is fueling the agitations of Nnamdi Kanu and IPOB?

People who are saying that are putting the cart before the horse before that should draw it. This marginalization issue has always been there and also being discussed. They cannot be solved in a violent way.It is when we have this young man out, then we will have dialogue. Dialogue is the only thing, meet people, solve their problems, give and take .That was how we applied it in our time.

Nigeria president of Igbo extraction has continued to elude the Southeast since the end of the civil war. 2023 is already by the corner. What is your thought on this and your advice to Igbo politicians?