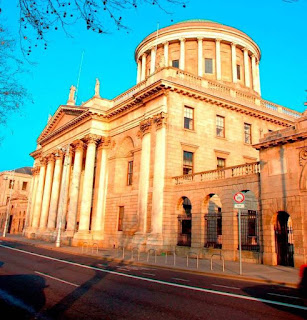 CASTLEKNOCK, DUBLIN (THE JOURNAL) -- The unsuccessful candidate for the position of President of a Dublin-based association that represents the Igbo people has launched High Court proceedings aimed at preventing the victor from being sworn in.

The application has been brought by Emmanuel Ejezie, from Castleknock, Dublin against the Igbo Union Dublin (IUD) which is an organisation made up of people from the South East of Nigeria known as the igbo or Ndi Igbo.

He claims the elections for the union’s position of President and Vice President that took place last July were flawed due to the spread of bizarre election conspiracies and actions by certain members of the IUD to ensure their preferred candidates were elected.

He seeks orders preventing the successful candidate Mr Arinze Onwuka from being sworn in as the IUD’s new president, which is due to take place in the coming days.

Today Mr Ejezie’s barrister Venetia Taylor Bl for told the court there were “serious irregularities” during the election, conducted on 15 July last, which rendered the election “a sham.”

Counsel said these included the IUD’s refusal to allow some 18 persons who were entitled to vote in the election enter the hall where ballots were being cast.

Counsel said on the night of the election those persons preventing from voting waited outside the hall for over six hours in heavy rain.

Other persons, counsel said, turned up and were allowed to vote at a time after when voting was supposed to finish.

In a sworn statement Mr Emmanuel Ejezie described the IUD’s election as being “not out of place in Putin’s Russia or some other totalitarian system.”

Mr Ejezie, who described himself as “a small public service vehicle operator” living in Ireland for over a decade, said that he was looking forward to being president as it would have been the greatest honour of his life, and “a dream come true”.

What occurred he said has led to “disenfranchisement, discrimination and inhuman and degrading treatment of some members of the union.”

As a result, he has brought proceedings seeking orders including one preventing the defendant from swearing in a new president and an order setting aside last month’s election results.

He also seeks a declaration that at the elections held on 15th of July, 2018 by the IGBO Union Dublin for the positions of president and deputy-president were invalid.

The application came before Ms Justice Miriam O’Regan, who after declining to grant the plaintiff a temporary injunction preventing the swearing in of the new president, but was prepared to grant permission to serve short notice of the proceedings on the defendant.

The judge made the matter returnable to a date next week.