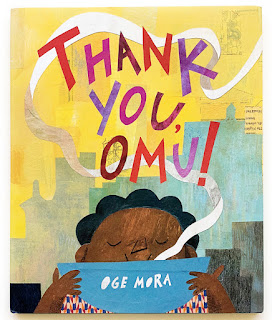 Mora, who grew up in Ohio and now lives in Providence, wrote and illustrated “Thank You, Omu!”, which grew out of a class assignment.

When Oge Mora signed up for the Picture and Word class as an undergraduate at the Rhode Island School of Design, she had no inkling of its importance.

“I never thought of myself as a picture book illustrator,” the Rhode Island resident says. “I took the course, and then everything else just fell to the wayside. It wasn’t work; it felt so natural.”

Now, that natural talent is being honored. Her first picture book, “Thank You, Omu!” has won a string of awards, including the 2019 Ezra Jack Keats Award for an illustrator, presented this month by the foundation named for the children’s author and illustrator, in partnership with the de Grummond Children’s Literature Collection at the University of Southern Mississippi. The award comes with a $3,000 prize.

Her book also received a Caldecott Honor Award and recognition from the New York Times, Boston Globe, Publishers Weekly and the School Library Journal as among the best children’s books for 2018. A Providence Journal review called the book “joyful” and cited its “expressive collage pictures.”

She traces her award-winning book’s origins to a “concrete moment” in that Picture and Word class when professor Judy Sue Goodwin Sturges told her, “I think you should do painted collage.” Mora, an illustration major, had dabbled in collage, “but she hadn’t yet used it as her voice,” Sturges says.

For inspiration, Sturges referred Mora to the work of Romare Bearden, whom the New York Times called “the nation’s foremost collagist” in his 1988 obituary, and Ezra Jack Keats. The latter’s work, Sturges says, “really got her going. She’d tap on my door, asking, ‘Is this good?’”

“I had so much fun,” Mora remembers. “I had fun painting paper, playing around with colors and textures.” She compares collage to putting together a jigsaw puzzle.

Every week, students had to come up with an idea and illustrations for a picture book, and “Thank You, Omu!” started with an assignment to tell a reductive or a productive story: one in which something is lost, or something is gained.


“I thought the more interesting narrative would be if something were lost and gained,” Mora says. She enjoys cooking and began thinking about her Nigerian grandmother’s spicy red stew.

The family always called her grandmother Omu, the Igbo word for queen, and in Mora’s fictional story, Omu is preparing a pot of stew for dinner. As the fragrance of the simmering stew drifts out her apartment window, it attracts the attention of a diverse group of city residents and workers who knock on the door and ask for a taste.

Omu generously shares bowl after bowl of stew until, when it’s time for her own dinner, there is nothing left. Then comes another knock on the door, followed by all the folks who had sampled her stew, bringing food to her.

The foundation looks for books that reflect different cultures, but foremost, Pope says, “These are books that kids love and parents love to read. They are an enjoyable bridge between cultural and racial divides.”

The awards are reserved for authors and illustrators early in their careers, and Pope says publishers send upward of 400 books for consideration each year. A committee of nationally recognized early childhood education specialists, librarians, illustrators and experts in children’s literature chooses two honorees, an illustrator and a writer. This year’s writing award goes to John Sullivan for “Kitten and the Night Watchman.”

Mora came to the attention of publisher Little, Brown Books for Young Readers after Sasha Illingworth, executive art director and RISD graduate, took part in the final review of work for the Picture and Word class.

Illingworth says she got goose bumps when she saw Mora present her book. “Her artwork was stunning and her story had heart.” As someone who was a student in Sturges’ class 19 years ago, “it meant so much to me that I could go back and help a fellow RISD student achieve their dream.”

Mora received a two-book offer, and her second book, “Saturday,” about the misadventures of a mother and daughter, will come out in October. She also is illustrating books written by other authors.

Now a Providence resident, Mora based the city where Omu lives on Columbus, Ohio, where she grew up. “I sketched cityscapes as a kid, and a city lends itself to collage; it looks sort of like a patchwork.

“I was always doodling. Everything was my canvas,” she recalls. Sometimes her father joined in, but he is an accountant by profession. Her mother is a pharmacist, and there are no other artists among her five sisters and two brothers.

“But there always was a big pot of stew,” she says with a laugh.

“It’s been a joy watching Oge succeed and to see readers respond so warmly to her heartfelt work,” says April Prince, a RISD lecturer and the “word” side of the Picture and Word team.

“Oge is a gem, and that comes through in her stories,” Prince adds. “She brought a lot of natural talent, insight, and passion to class, but she worked hard as well. We hope she’ll be making books and touching readers for many years to come.”