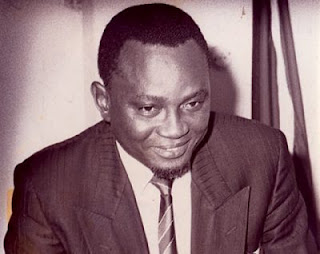 I believe that I first encountered, not met, Dr. Stanley Macebuh, as he then was to me, somewhere in Enugu in 1977 or early 1978. He was yet a fresh name and as I read his column, the freshness of his distinct style intrigued me in equal measure with his peculiar surname. To me, here is a puzzle published weekly on the pages of the venerable, stodgy Daily Times, the old and unrepentant medium that I considered too old to bend or so harbour this kind of writer and his views. I had found that the man is supposedly sporting an Igbo heritage too. His reputation was budding and we spoke briefly. His accent was un-Nigerian and he had an aura which appeared natural and invited you to speak your mind. I did perhaps with sparks in my eyes, thrilled on meeting this revolutionary man then unknown to the Enugu crowd, in the flesh. We chatted about his recent writings, the military and their heavy-handed guide of our transition journey.

This must have been in relation to the no go areas of the 1977/78 Constituent Assembly. On reflection, this was no staple conversation for your typical undergraduate keen to impress our brand new intellectual and I guess it surprised him that I was not a Political Science major.

Our paths never crossed again but I recall that the week the Daily Times thundered one of its most famous editorials, “For the Avoidance of Doubt” in 1979, if my memory serves me well, my thought was on Dr. Stanley Macebuh (as he then was to me) for the cultured language and definitiveness of logic I speculated that he may have contributed to that piece of record. It was a stirring response to garrulous members of the ruling class masked as federal legislators. It must be 1983 when my own Eddie Iroh took me along to “some meeting in Ilupeju” where he is discussing a newspaper project and he endeavoured to convince me that he could leave his high profile career in national television to return to his print writing because the man talking to him is called Dr. Stanley Macebuh.

Months later, I, myself, was privileged to join history and write articles and analysis on both the only two business pages of the very maiden edition of The Guardian. Dr. Stanley Macebuh asked for me and I told him it would be difficult to leave my current employment to run the business desk and that I would only write with my inverted surname as nom de plume. He kept chuckling at the “Tony Attecann” byline and much later, “Joe Kadiri from Broad Street” It is a measure of the man that in an era when fax machines had not become standard, one had to handcarry his written contribution and travel, yes travel, from Broad Street and Victoria Island all the way to Rutam House in part homage to the unadulterated chutzpah Dr. Stanley Macebuh brought to the table.

As I looked around The Guardian those days, you could see and feel talent walking and working. I became a regular visitor also partly in solidarity with the several brilliant persons Stanley had brought under that roof some of whom are my dear friends till date. He would lead but make it appear easy and collegial. His impatience with cant was encapsulated in the seminal introduction of the simply Mr. Policy which rocked the Nigerian society for a year or so and the very tight language of the first Guardian years. By the time he was to leave The Guardian and move to his new office closer to me, he had become very close to me and emerged in my lexicon as the Bossman, a usage a few other friends of mine adopted. The Bossman could laugh at himself which I told him was one of his great strengths. I can still see him shaking at the shoulders in his peculiar laughter rhythm.

The others being an eye to talent, his fascinating intellect and his ability to restrain you with the most economical of words from proceeding on a course of action: “Leave it, I say, just leave it” to which he would add a grunt for effect. This pacificist trait has now gone all through his life and times and added to little regard for money as a store of wealth meant that the Bossman, ordinarily a man without guile, was unable to join any conspiracy or club by any other name, to look out for himself in several other ways in a malevolent world. I recall a true and bad example of this in a tripartite transaction for which I held an instrument which minutes before presentation was locked out at the entrance on the day BCCI was closed down in London. The Bossman was unperturbed and the funds never recouped.

Could he have been a sterner person and flourished such that the callow writers in the hours after his passing on would never have described the size of his bank account in the same breath as his towering achievement as a renaissance man? Perhaps, he could have compromised himself at the Obasanjo Presidency or struggled to remind President Yar’Adua that they shared a house and several meals and go way back in an earlier era? No, not the Bossman, a man woven by nature leaving out greed and envy, full of innate dignity without a bulk of ego. He remained true to himself, detached and stoic.

It is most likely the case that in the not too distant future there will be many who will be lost in search of Stanley Macebuh claim to fame. Quite easy to assist them: First, as the Latin would say, circumspice, look around you. Take a quick excursion on the practitioners of print journalism and in particular the purveyors of column and opinion writing today: You can separate them into the school that learnt directly from Stanley Macebuh, the others that successfully imitated him and the rest. He could be said to have been let down by this or that circumstance.

Many are known to have realised very belatedly that they could afford to offer the Good Lord a bottle of aerated bottled, chilled water if only they could decipher it was for the Lord and not just their irritating neighbour as the Good Book told us. That lesson will continue to ring in our ears. Stanley’s passing on is painful in a peculiar sense and but as himself, the Bossman would say in that pitched exception to his tone, “my friend… just leave it”. Fare thee well my friend, God grant you rest and may your kind increase.

Nnachetta, erstwhile commissioner for information and strategy Anambra State, served as a visiting member, The Guardian Editorial Board.