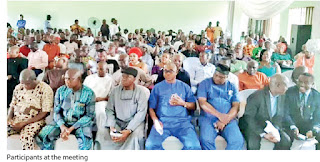 OWERRI (DAILY SUN) -- There is palpable anxiety over safety and security of life and property in the oil producing areas of Imo State. This followed the renewed cult war that erupted two weeks ago in Awarra\Ochia communities in Ohaji/Egbema council area between the “Deywell” and the “Deygbam.”

Daily Sun gathered that at least seven persons were killed in the mayhem that once again raised the spectre of violence in the oil producing communities. Ohaji\Egbema council especially the Egbema axis, which stretches into Rivers State, has remained volatile overtime. Most of the cultists or militants who usually cause havoc are believed to be from the Rivers State, who would immediately fizzle into the neighbouring state after committing atrocities.

Insecurity became so grave in 2017 in places like Awarra, Assa, Ochia, Obile and Obite due to the activities of the cult groups with the rampant kidnapping, killing and armed banditry, forcing majority of the indigenes of the communities to flee their homes.

However, it was in a bid to mitigate the ugly situation that the former governor, Senator Rochas Okorocha, declared blanket amnesty for all members and leaders of the armed cult/militant groups operating in Ohaji/Egbema communities.

He set up an amnesty committee with his wife, Mrs Nkechi Okorocha and former Deputy Chief of Staff (Operations), Kingsley Uju as chairman and vice-chairman, respectively. About N1billion was then set aside by the state government for the programme.

It was alleged that the committee instead of rehabilitating all the members of the various cult/militant groups who surrendered their arms through vocational training and empowerment, rather, settled their key leaders. Thus, the fringe leaders who were not accommodated in the amnesty deal reportedly returned back to the bush to continue the reign of terror.

Government was alleged to have unleashed the militants on the opposition. They were also reportedly used by to attack Owerri Nche-Ise people and traders who had resisted the demolition of Ekeukwu Owerre market in 2017.

Sequel to the untidy nature of the amnesty programme, fringe leaders of the Iceland cult group popularly known as Black Face and Enyia Iwu a.k.a Sparrow; had unleashed terror on the area without ceasing. Reports said their onslaughts allegedly claimed about 20 lives with over 30 houses burnt down in Assa and Obile communities of Ohaji/Egbema council before they met their Waterloo in the hands of the Special Anti-Robbery Squad (SARS), in October, 2017, in the dreaded Nwagbaubi forest in Assa.

Also, during the 2019 general elections, many registered voters in Ohaji/Egbema could not cast their votes because of the violence unleashed on the area by gangs alleged to be “Kingsley Uju Boys.”

For instance, prior to the Presidential and National Assembly elections, the Osemoto country home of Dr Henry Okafor, a former ally of Okorocha and candidate of the All Progressives Grand Alliance (APGA) for Ohaji/Egbema/Oguta/Oru West Federal Constituency, was demolished.

At the meeting, Irona made it clear to the community leaders that government would not treat hoodlums with kid gloves, as it would not patronise criminals. He warned that even those granted amnesty by the last administration are placed on the security watch list:

“I invited you to discuss the security challenge in your area. I want to know what really the problem is. Why are you people making trouble again, after receiving amnesty? The government decided to give you benefit of the doubt. We are not interested in witch-hunting anyone.

“No government will fold its arms and allow her citizens terrorized, harassed and killed under whatever guise. Whatever the issue is, we shall not patronize criminals. The hostility must end immediately and unconditionally.”

The deputy governor described the latest violence in the area as unfortunate, warning that only peace and civilized behaviour can guarantee meaningful development of the area:

“We shall not give amnesty to anyone. Those of them given amnesty are on our watch list. If they involve in any form of criminality, we shall withdraw the amnesty. This meeting is not partisan, but a meeting of stakeholders of Ohaji/Egbema/Oguta.”

He disclosed that government has concluded arrangements with the police to establish a division in Awarra to stem the tide of violence in the area.
Igbo Imo State Newsroom Owerri