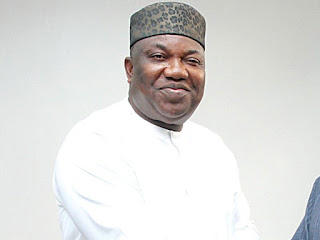 ENUGU (THIS DAY) --There is no doubt that the recent inauguration of seven sectoral ad-hoc committees by Governor Ifeanyi Ugwuanyi of Enugu State, to review the activities of his administration in the last four years and make recommendations that would assist the government to reposition the state’s public service for and advancement of good governance, is a step in the right direction.

The innovative approach which is among the series of post-election executive actions so far taken by Ugwuanyi, to advance the cause of development in the state, is also geared towards the full actualization of his administration’s policy thrust and campaign promises for more positive impact. The administrative review therefore underscores the governor’s ultimate desire to further strengthen the wheel of governance for the wellbeing of the people.

After his re-election, the governor has continued to entrench peace and good governance, address the needs of residents and close the gap between the rural and urban areas in line with the 2019 budget deliverables for better urban, inter-local government and rural infrastructure in the state.

His administration’s first tenure, no doubt, witnessed unprecedented achievements in all sectors of public service, especially in the areas of massive infrastructural development, peace and security, workers’ welfare, sound education, qualitative and affordable healthcare delivery, investment drive and socio-economic expansion, among others, despite the lean resources at its disposal.

For instance, Ugwuanyi’s administration has remained regular in the payment of workers’ salaries and retirees’ pensions. Over 400 kilometers of roads have been constructed and reconstructed across the length and breadth of the state. The administration has recruited over 4000 primary and secondary schools teachers, with additional 1,500 for primary education ongoing. 589 primary and secondary school blocks across the state have so far been constructed and renovated, while additional 263 are ongoing.

Learning tools are being procured intermittently to improve the standard of education. Similar transformation is taking place in the state-owned higher institutions such as in the areas of infrastructural development and accreditation/reaccreditation of courses. The story is same in the health sector, among others.

Recently, Enugu State was rated by the World Bank Group as the second most advanced state in Nigeria towards the frontier of global good practices with regards to Ease of Doing Business. Through the impressive increase in the state’s Internally Generated Revenue (IGR), as a result of far reaching reforms introduced in the sector by the governor, Enugu State has remained on top as one of the few states in the country that can survive without allocations from the federation account, among other outstanding ratings.

The ongoing reform in public service fundamentally mirror the programmes and policies of the government as contained in its four-point agenda, take stock and engage in critical analysis of inherent issues and developments to be able to invent new ideas on how to improve efficient service delivery and accelerate good governance in the state.

The public service reform therefore is a major milestone that has demonstrated the governor’s dexterity, innovativeness and political will to undertake another voyage towards the rapid development of Enugu State.

Consequently, the reform has reawakened the consciousness of the public to the rising challenges facing the public service and the need for periodic policy review to enable government at all levels to strengthen their service delivery strategy for optimal result.

Inaugurating the all-important committees, Gov. Ugwuanyi expressed confidence that the membership will deploy their wealth of experience, expertise and commitment to add value to the governance of the state.

The governor disclosed that the committees will “review the structure and operations of Enugu State Public Service over the last four years; analyze the strengths, weaknesses, opportunities and threats within the various sectors of governance; develop roadmap, templates, policies and systems that will support the government to consistently and optimally discharge its various sectoral mandates.”

Other terms of reference, according to him, include making recommendations that would help his administration to “reposition government to improve transparency and coordination in its business process and strengthen responsiveness of the Ministries, Departments and Agencies (MDAs); ensure that the administration delivers on its electoral promises and social contract, key of which are employment generation, enhanced social services and good governance, rural development, security and justice; consider any other matter(s) which may be incidental or ancillary to the above stated tasks and make feasible recommendations thereon to the state government with a view to improving collaborative productivity and optimal delivery of desired services by the government”. Ugwuanyi opted to work closely with the committees and operate mostly from their secretariat and less from the Government House till the conclusion of the exercise, which has a one month duration.

Te Public Service Committee Chairman, Prof. Onyema Ocheoha, who responded on behalf of other members of the committees, said, it was a great honour to serve the state.

The erudite scholar and professor of Public Administration, applauded Gov. Ugwuanyi’s passion and dexterity in conducting the affairs of the state in his first term of his administration as well as the innovative approach he has adopted to advance good governance in the state.

He promised the governor that the committees will study the terms of reference and adopt a holistic approach to policy analysis and decision making in the discharge of their duties for optimal result, saying: “You have taken the right people to handle this important assignment”.