Anambra: PDP’s Position On Zoning And Other Matters 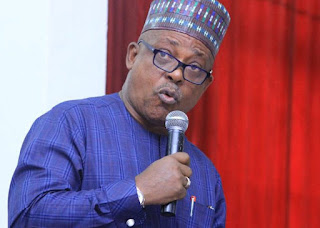 ENUGU (DAILY SUN) -- Recently, the South East zone of the Peoples Democratic Party (PDP) met in Enugu in what might have been a routine conclave of party members and officials who were desirous of returning the party to its regional glory. One of the highlights, and indeed the most pronounced outcome of the meeting, was the decision of the party not to zone the 2021 governorship election in Anambra State to any particular zone.

Prior to the decision, the ruling party in the state, All Progressives Grand Alliance (APGA), had announced its decision to zone the office to Anambra South. The action, though not unexpected, has made a few politicians from the zone to also canvass that the PDP equally zone the ticket to Anambra South. Those behind this call had also gone ahead to recruit traditional rulers from the zone who also, recently, issued a statement calling on all political parties in the state to zone their governorship ticket to Anambra South.

Earlier, the South East zone of the PDP had, during a courtesy call on High Chief Obiora Okonkwo, a party chieftain from Anambra Central, at his home in Ogidi, last July, vowed to wrest power from APGA. Speaking on the occasion, South East zonal chairman of the party, Chief Austin Umahi, said that Government House, Awka, was PDP’s next target, having successfully won back Imo State. He said the target was to ensure that all five states of the region were controlled by the PDP. The outcome of the event may have sent cold shivers down the spine of APGA and its leadership, forcing it to re-emphasise its decision to zone the next governorship to Anambra South.

The call for the zoning of the next governorship to Anambra South is, at the moment, the dominant issue in Anambra politics, as stalwarts network for the next election. However, the voices of those who are opposed to zoning as a criterion of selecting leaders in Anambra State have been dominant over those who are in its favour. The majority of Anambra indigenes believe zoning has become anachronistic and as such ought not to come within focus as Anambra moves towards the next governorship election.

Those who argue against zoning insist that Anambra has grown past the idea. They insist that, since all politics is local, Anambra State is a single-tribe state and as such every part of the state is interconnected. For them, Anambra is homogenous and zoning would only seek to split the people along political lines, something that is anathema to the political evolution of the state as the leading light of the South East.

There is every reason to agree with those pushing against zoning. While the Igbo people, among them Anambra people, are pushing for the zone to produce a Nigerian President, it, however, does not logically follow that any part of Anambra State suffers the sort of political exclusion that the South East suffers as a region. Therefore, using the quest for zoning at the presidential level to make a case for same in Anambra suggests that Anambra South suffers political exclusion and marginalisation. But facts indicate that the zone has had a fair taste of the office of governor in Chinwoke Mbadinuju, Dame Virgy Etiaba and Andy Uba. In fact, every Anambra politician agrees that it was rather Anambra North that suffered such exclusion until Peter Obi and leaders of APGA, in their wisdom, worked the political pendulum to ensure a sense of equity was enjoyed by the zone through the incumbent.

Logically, the zoning issue in Anambra, though not known to have been agreed at any convention or meeting of all Anambra sons and daughters, has reached its climax. It can no longer yield to logic. Therefore, simple reason demands that the contest be made open to all who have the credibility, competence and capacity to aspire and seek the votes of Anambra people to lead. Nothing else would be more elevating of the eminent position of the state as leading light of the South East.

That is exactly what the PDP has done by throwing open the race and discountenancing zoning. By walking that road, PDP positions itself to win back Anambra. However, there are banana peels that the party must avoid. While zoning is not an issue with the PDP, imposition of candidate is. For the party to win back Anambra as easily as it plans, the first step must be to allow internal democracy to thrive. The delegates must be allowed to elect the candidate of their choice. Doing otherwise would return the party to its ignoble past and defer its hopes of returning to power in the state.

This position, as already expressed by many PDP faithful in Anambra State, is accentuated by the party’s performance at the 2019 presidential election. PDP had overwhelming support in Anambra State at the last election. Beyond Peter Obi, an erstwhile governor of the state, being the vice presidential candidate of the party, the conduct of the presidential primary election in Port Harcourt and the outcome did more to win back support for the party.

PDP came out of the Port Harcourt convention stronger and more united. All the presidential aspirants queued behind the winner, Atiku Abubakar. A repetition of the same feat in Anambra State would easily deliver Government House, Awka, to the party in 2021. And the signs are already there.

Anambra PDP had registered itself in the consciousness of Nigerians as the most acrimonious. However, it has, since the last governorship election in 2017, worked its way peacefully through all contending issues and coalesced under one umbrella. That umbrella, now being held by Chief Ndubisi Nwobu, is stronger, bigger and more purpose-driven. The unity, sense of purpose and internal democracy now driving Anambra PDP is a winning formula, which has given party members greater confidence that the next governorship election is fair game, one to be contested from a position of strength.
Daily Sun Enugu Igbo Newsroom