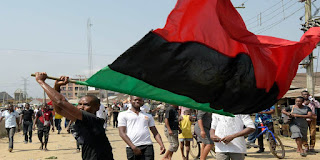 The Indigenous People of Biafra, IPOB, has declared that it would go ahead with its resolve to attack political leaders.

IPOB also said its struggle for the actualisation of Biafra has taken international dimension, insisting that there was no going back.

The pro-Biafra group said it had no regret attacking former Deputy Senate President, Ike Ekweremadu in Nuremberg, Germany at the weekend.

This was contained in a statement by its Head of Directorate of State, China Edoziem.

The group described those condemning the attack on Ekweremadu as sycophants, vowing not to relent in its struggle for a sovereign state of Biafra.

The statement partly read, “The Indigenous People of Biafra led by Mazi Nnamdi Kanu will continue in the avowed pursuit of our right of existence as a people, independent of the evil enclave called Nigeria.

“We’ll be unhindered, unperturbed and unfazed by the cacophony of morally bankrupt manufactured voices that appear to rally round one of them, Ike Ekweremadu.

“Going through the vomit of some of these faceless sycophants with no iota of influence on the ground in Biafraland apart from dishing out meaningless drivel in the name of press statements, one is confronted with the mindset of a people living in a Banana Republic in which all forms of freedom of expression is brutally repressed and mediocrity extolled to high heavens.

“This battle which we the Indigenous People of Biafra has embarked upon will be at a time, place and methodology of our own choosing.

“It is imperative to state that in making that choice, there will be no differentiating between the subservient Biafran politician(s) who see nothing and hear nothing wrong when Biafraland is under military siege and their caliphate masters that dehumanize, abduct, torture and murder at will.

“Very soon, we shall show Dave Umahi, the governor of Ebonyi State that IPOB has not only the capacity and reach but also the power to achieve our set objectives and fulfil our promise to the living and the dead.

“We are waiting for them and their trumpeters in all the civilized nations of the world. The story of their humiliation will become a subject of study in foreign institutions.

“Our struggle has shifted to the international arena where every eye will be watching and taking note.”
Biafra Daily Post Igbo