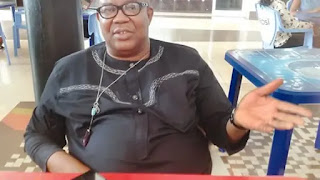 Evang Elliot Ugochukwu-Uko, the founder of Igbo Youth Movement, IYM, on Friday alleged that Fulani herdsmen are implementing a carefully “choreographed Jihad of intimidation and conquest” in the South East.

Ugochukwu-Uko made the allegation while warning that the South East has been pushed to the wall through the alleged killings in the region by Fulani herdsmen.

In a statement, he personally signed and forwarded to DAILY POST, the Secretary-General of the Eastern Consultative Assembly, ECA, wondered if there was a deliberate ploy to weaken the South East region.

According to Ugochukwu-Uko: “Every once in a while, the devil seems to take total control of events in a kingdom. The result usually is avoidable bloodshed, bedlam, mayhem and utter destruction which takes decades to rebuild. We are sadly, inexorably heading towards that path, the government is either overwhelmed or complicit. The horrific brigandage of the Fulani herdsmen has gotten way beyond what is condonable and tolerable.

“The brazen rape and murder of 67-year-old, Mrs Pat Ugwu in her farm at nchatancha Nike, Enugu state two days ago, is simply put, unpardonable and unacceptable.

“Traditional rulers, priests, and community leaders seem to preferred targets of choice, these expansionist demons of death are schooled by their sponsors and masters to hunt.

“It has finally become clear that these Fulani warriors and their protectors are simply implementing a carefully choreographed jihad of intimidation and conquest. General Danjuma screamed they are being protected by the military and security forces, the killing of policemen by soldiers in Taraba confirm soldiers could be compromised, confessions of arrested culprits that helicopters drop guns and ammunition for them, in the forest, simply completes the horror script. We have been under siege for 4 years now.

“The hapless communities now have no other choice than to defend themselves or perish. The days of endless endurance and era of trusting the security agencies to protect our people are over. The Fulani herdsmen brought war to our land as part of a larger agenda of vanquish and DOMINATE. The ferocious incursion into our farmlands and homestead with rape, beheadings, amputations, and general terror is the age-old well-known trademark of these expansionist warriors for centuries. Our people are clearly in trouble.

“Is there a deliberate ploy to weaken our region by cleverly turning the masses upon our political leaders? Our governors are glibly titled “chief security officer “whilst the entire security apparatchik is consciously placed under the stranglehold and control of a particular region and section of the country. The conspiracy theory that a scheme to weaken our region by turning the masses against politicians from our zone by deliberately castrating them through centralizing the entire security architecture under northern Muslims, while naming them Chief security officers, just to cast them as weaklings and traitors against the interests of their people,is fast gaining ground.
The cloud is gathering, the rain may fall any day now. Those whose worldview is all about conquering and dominating others are about to set West Africa ablaze once more. We know the world is watching.”

He accused Gowon of creating the “calamity eating up the country today.”

“This brings us to the quite annoying fake life of an 80 something-year-old past head of state who prefers to go about praying for peace, as he steadfastly refuses to lobby other leaders to embrace restructuring of Nigeria, the only true route to reinventing and saving the country.

“This same man brought upon this country the calamity eating up the country today, when he created 12 states in May 1967, and unified the revenue collection and distribution, thereby effectively burying the 1963 constitution. His prayers remain meaningless as long as he refuses to be truthful.

“Meanwhile, we congratulate the indefatigable Prof.Banji Akintoye on his election as the leader of the great Yoruba nation. A very knowledgeable leader of men. We have no doubt that he will move both Nigeria and Yoruba nation forward,” he added.
Daily Post Essay Igbo Igbo Politics