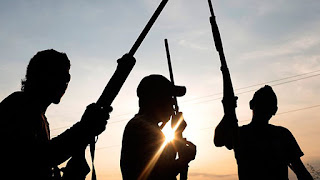 Some unidentified gunmen. Image: AFP via The Guardian

The Catholic Church yesterday said it was saddened and shocked by the murder of one of its priests, Rev. Fr. David Tanko, in Taraba State.

The tragedy occurred barely a month after suspected Fulani herders killed Rev. Fr. Paul Offu in Enugu State. The murder of Offu had also followed the killing of yet another priest, Rev. Fr. Clement Eziagu, a month earlier.

The late Tanko was attacked yesterday morning in Kufai-Amadu village along Takum-Wukari road as he went for a peace meeting. Parts of Taraba State have been embroiled in clashes between the Tiv and Jukun ethnic groups.

The Chairman of Takum Local Government Area, Shiban Tikari, confirmed the incident, saying the assailants, “after killing him, set him and his car on fire.”

Reacting, Bishop Charles Hammawa of the Catholic Diocese of Jalingo told the News Agency of Nigeria (NAN): “We received the news of his death with shock and great sadness. The diocese is mourning. We have been preaching peace and making efforts to bring the parties that were enmeshed in crisis in the area together for a roundtable discussion.

“For a priest who has been preaching peace to be killed in this most gruesome manner is pathetic, to say the least. A priest belongs to all. For now, we are not pointing an accusing finger at any group for being responsible.”

He said the state police command disclosed that it was investigating the case and prayed that the perpetrators would be brought to justice.

“Our basic concern now is to give him a befitting burial. We don’t want any group to go on reprisal. Going on reprisal will only worsen the situation,” Hammawa added.

Tikari, however, blamed the killing on Tiv militia, whom he accused of alleged attacks in southern Taraba.

Taraba police spokesman, David Misal, could not be reached for comments, as calls and text messages to him were neither acknowledged nor replied to.

But Inspector General of Police Mohammed Adamu issued a statement yesterday, where he condoled with the church and ordered the state commissioner of police to fish out the killers. He further expressed concern over recent attacks on clerics in parts of the country and directed commissioners of police in all states to pay special attention to the clergy and step up security around worship centres.

In another attack in Wajirko village, Borno State suspected members of the terrorist Islamic State of West Africa Provinces (ISWAP) on Tuesday killed 11 workers who were laying cables for a telecoms firm.

The assailants had reportedly ordered the workers to discontinue. But Modu Bukar, a resident of the area, told reporters: “The villagers are starving. Laying the cables provides a means of livelihood. We had to ignore the threat to survive the 10-year insurgency.”

Meanwhile, the new Minister of Police Affairs, Muhammadu Dingyadi, yesterday restated the commitment of the Federal Government to providing security for Nigerians. He gave the assurance when leaders of the ruling All Progressives Congress paid him a visit in Sokoto State.

He told the participants: “Many are beating the drums of tribal and religious superiority. Some are even seeking to divide the nation into ethnic zones.”

Osinbajo consequently urged Muslims and Christians to live up to the tenets of their faiths and promote the best values of humanity.