Ohanaeze Preaches ‘Biafra Of The Mind’ 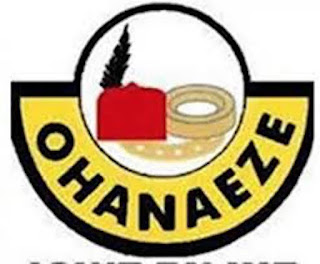 Spokesman of Ohanaeze Ndigbo worldwide, Chuks Ibegbu, has called on the people of the South-East to embrace Biafra as a philosophy, which he called “Biafra of the mind,” rather than a physical/geographical space.

He also called on the South-East to put their acts together and not imperil the region politically.

Ibegbu urged IPOB and pro-Biafran groups to have a corridor of harmony with Igbo governors and Ohanaeze Ndigbo rather than its current posture, even as he called on political actors in Igboland to serve the people or quit the scene.

According to him, “I know some people use our nostalgia for Biafra to feather their nests and create disunity in Igboland, but what we need today is Biafra of the mind and not necessarily physical Biafra.”

Ibegbu noted that some commentaries and posturing in the South-West may give room for the South-East to be outsmarted in the next political dispensation.

He insisted it was the turn of the South-East and Igbo to produce the next President of the country on the basis of equity, justice and fair play.

He said: “Who said there is no morality in politics? I want to advise some extremely ambitious people, who want to torpedo justice and equity after the north at the presidency to desist from such in their own interest.”

Ibegbu noted that Nigeria has to be restructured before the next political dispensation “or we continue to move in circles, even with an Igbo man as President,” calling for the implementation of some salient aspects of the 2014 confab report.

In another development, the Coalition of Civil Society Organisations of Nigeria, COSCON, has asked Nigerians to insist on good governance from their political leaders and disgrace those that loot their commonwealth.

Director of Programme of the group, Edomobi Promise, told Nigerians to “boo and pooh pooh” corrupt politicians rather than worshipping them and giving them titles, noting that “once this is done, they will stop their gra gra and looting.”

While regretting the attack on Senator Ike Ekweremadu in Germany, Promise noted that the act will be a warning to Nigerian politicians that the game has changed and they must also change.

He noted that the group would soon launch Operation Free Nigeria from Corruption and Operation Rescue Nigeria From Beastly Politicians and accused religious men and the elites of high level of unpatriotism, asking them to turn a new leaf in their own interest.