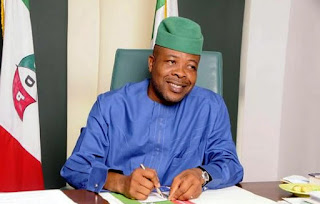 OWERRI (SUN NEWS ONLINE) -- First 100 days in office of heads of government has been elevated into a significant show. And this has inherently become a global trend. This is, more so, for those who are running their first term. In the United States as well as other developed democracies, first 100 days is perceived to be such an important event. The result is that the performance of the political leaders is essentially scrutinised and scored. Instances abound in former Presidents of the United States who were rated during their first 100 days in office. They included: Barak Obama who got 65% of Americans approval ; John F Kennedy, the highest in the history of America, 74%, Jimmy Carter 69%, Bill Clinton 55% and George W. Bush 58%

In Nigeria, the season of first 100 days in office is here again given that the heads of the executive arm of government at federal and state levels took oath of office on May 29 this year. As a result opportunity has yet again been offered to Nigerians to appraise and rate the performance of the president and the 36 states governors. This is germane so as to separate the chaff from the wheat; the lethargic ones from those who are serious minded

It is incontrovertible that Emeka Ihedioha, Imo State Governor belongs to the serious-minded. And this is self-evident and verifiable. Within 100 days in office, he has evidently moved with pace, audacity and decisiveness to lay veritable foundational framework for the transformation, growth and development of the troubled state which for eight years suffered a huge setback on account of gross misrule by the immediate past regime in the state headed by Owelle Rochas Okorocha

Just like Roosevelt who promised drastic initiatives within the first 100 days as United States President to set a standard of action against Great Depression and accomplished it, Ihedioha assured of concrete foundational initiatives and actions to deal with the rot and decay he inherited from the past administration and to set a remarkable tenor for the people and government. He has kept faith with the promise.

In 100 days, Ihedioha has been able to initiate positive actions in critical sectors of Imo development. These include: power, roads rehabilitation, agriculture, floods and erosion control, security, good governance, education, health, pensions, civil service and so on. This is not praise-singing but fact-based and has been laid bare in this piece.

For instance, only last Thursday, he flagged off an ambitious and massive road rehabilitation and construction projects that cut across the three zones in the state namely, Owerri, Okigwe and Orlu, numbering 13 projects. The projects have been awarded to various contractors and estimated to cost N24.32b. Some of the roads include: Nekede- Ihiagwa; Douglas –Poly Junction; MCC-Uratta-Tronto Junction; Ahiar-Okpala junction; Aba Branch-Ahiara Junction, just to mention a few.

In order to open the rural areas for economic growth and wealth creation Ihedioha-led administration has within the first 100 days taken pioneering steps towards flagging-off the rehabilitation/ Construction of 380.7 –kilometre rural roads in the 27 local councils of the state named Rural Access and Mobility Project (RAMP 2) at the cost of about N13b.

Besides, the new government has commenced a desirable process for the enthronement of good governance and sanitisation of the accounting system through the introduction of the Treasury Single Account (TSA) regime which came into being with Governor Ihedioha’s ratification of the Executive Order 005. This fiscal policy thrust makes it possible for accountability, transparency and due process to be infused in government. TSA also ensures that financial leakages in the state are controlled and all government accounts fused into one thereby enhancing the Internally Generated Revenue (IGR).

Prior to the introduction of TSA, government, specifically the last administration operated 250 accounts many of which were in pseudo names. TSA has automatically reduced the 250 accounts into one. The Bureau of Public Procurement and Intelligence (BPPI) has also been revitalised towards ensuring that due process and transparency are imbued in all government procurement processes in the state and to align with global practices and money value.

Another signature project being undertaken by Ihedioha within the first 100 days, is the N9.9b World Bank assisted Ezemazu gully erosion control project in Ideato North local council. He concretised the project by committing government to make a payment of N500m counterpart fund to the Nigeria Erosion and Watershed Management Project (NEWMAP), an agency of the World Bank

Deeply concerned about the worrisome manner Owerri is usually submerged each time it rains in the city and poor condition of our drainage system, government took a decisive action by making the desilting of Owerri Municipal a top priority of its 100 days in office. To this end, over 80 per cent of the municipality has been desilted including Nworie and Otamiri Rivers and Lake Nwebere. This development has substantially assisted in reducing the rate of floods in the state capital

In addition, the Owerri Regional Water Scheme has been restored . As a result, water has started running in some parts of Owerri within the shortest existence of the new government, after eight years of dry public taps. Imo State Power and Rural Electrification Agency (I-POREA) has been set up to facilitate power supply in the state as a result remarkable progress has been made in restoring electricity supply to areas that are deficient

The new government has also commenced pension verification exercise to begin monthly payment of pensioners. Records show that the last time the pensioners were paid in the state was in 2015. Within the period under review, Ihedioha has also taken on civil service reform and salvaging of the education sector, among several other concrete and rewarding actions he has taken in various other sectors. He has flagged- off the rebuilding and equipping of four technical colleges in the State based on his vision of making technical education, the fulcrum of youths entrepreneurship and wealth creation.