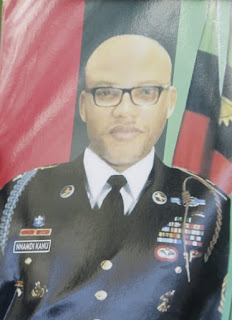 
Leader of the Indigenous People of Biafra (IPOB), Nnamdi Kanu, has been invited to the European Parliament in Brussels, Belgium, to address the issue of IPOB agitation for Biafra freedom.

The meeting is scheduled for European Parliament Building, Brussels, Belgium on Tuesday, September 10, 2019 between 4 and 6pm EST. The invitation was confirmed by Kanu on his Facebook page where he wrote

“I have graciously accepted the invitation of a few members of the European Parliament to address the burning issue of IPOB agitation and what a NEW BIAFRA means for Africa. I look forward to leading hardcore IPOB family members in Europe to this historic encounter.”

Meanwhile, the pro- Biafra group yesterday declared that the battle line is now drawn between them and the South-East Governors, challenging the state executives to set foot abroad or appear in public anywhere outside Nigeria.

Responding to the statement by the Chairman of the South-East Governors’ Forum and Governor Ebonyi State, Dave Umahi that the Governors would not apologize to IPOB and that he would personally inform the group whenever he would be travelling abroad, the group warned that it is fully ready to battle the governors.

IPOB had earlier said that the only way it would forgive the governors was if they apologise to the group for their alleged complicity in the proscription of IPOB and the launching of Operation Python Dance by the Nigerian Army in the Southeast.

The group’s Media and Publicity Secretary, Comrade Emma Powerful told Saturday Sun yesterday that the group was aware of the alleged weakness of the governors and their avowed loyalty to “their Northern masters,” assuring that any attempt by any of them to visit abroad would be met the wrath of IPOB.

He said, “We are waiting for them to set foot abroad or appear in public anywhere outside Nigeria then they will know how upset we are. We remain conscious of the complicity and duplicity of South-East Governors in the whole Operation Python Dance debacle and will hold them accountable at the right time. We are aware of their secret dealings with this Government of Nigeria to enslave our people, a task we assure them can never be accomplished as long as IPOB exists.”

He stressed that but for IPOB, Ebonyi and Enugu state would have been taken over by herdsmen, adding that the group would leave no stone unturned in restoring the dignity of the Igbo.

“It is demeaning for IPOB to be exchanging words with slaves and traitors working for an external enemy. Enugu and Ebonyi would have fallen to the Fulani if not for IPOB. South-East Governors are weak, wretched and incapable of standing up to their caliphate masters. Only IPOB can restore the dignity and lost honour of our people.”

Stressing that IPOB was no longer interested in any apology from the governors, Powerful said, “Following the recent denial and subsequent refusal of South-East Governors to apologize or do the needful towards IPOB against a background of their incessant attacks, abduction, arrest, killings and proscription of unarmed peaceful Biafrans; before, during and after Operation Python Dance II in 2017, we the global family of the Indigenous People of Biafra (IPOB) categorically state that we are not interested in any apology coming from those who have continued to shamelessly preside over the Fulanisation of their ancestral lands.

“They are weak and pathetic men who have sworn loyalty to their Fulani masters. These traitors and saboteurs are not leaders but instruments of Fulani incursion and agents of the age-old Fulani agenda. Unfortunately most people are yet to understand the danger these people portend for our existence as a race.

“A few days ago the residence of Dave Umahi was raided in Abuja by the same Fulani caliphate he is so slavishly serving for merely mouthing that movement of Fulani terror herdsmen will no longer be tolerated.

“That will teach him and others like him that treachery against one’s own people never pays. For reading out an innocuous communiqué, he was targeted like a common criminal. Few days afterwards he was seen shamefully bowing down before the Nigerian President like a naughty schoolboy in front of a headmaster.”