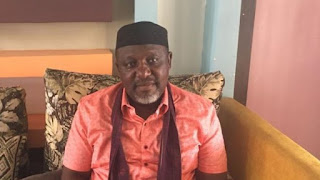 
For a man whose words were law, who for eight years, ruled his state like an Emperor, the situation former Imo state Governor, Rochas Okorocha has found himself is strange to him.

For a man who, for those eight years, disobeyed all Court orders, thus, rubbishing the Judiciary, it is an irony that he would run to the same judiciary to seek protection.

But for Okorocha, now, the Senator representing Imo West, that is the reality of his life now.

Okorocha has just gone to the Federal High Court, Lagos division, asking it for a perpetual injunction to restrain the Imo State Government, or its agents, from arresting, detaining, harassing, or acting in anyway which could infringe on his rights.

This is sequel to a Citizen’s arrest order placed on him by the Imo State government, anytime he steps into the state.

The order was given after members of a Committee, set up by Government to recover government properties, allegedly, looted by him, were attacked by alleged thugs when they stormed his house for such recoveries. Its Chairman, Jasper Ndubuaku, was stripped, pushed into the gutter, and beaten to a pulp.

The alleged thugs were, allegedly, quartered at Okorocha’s Spibat residence, from where they trooped out to pounce on Ndubuaku. This was a few days after the former governor, while addressing his supporters in Owerri, ordered them to treat anybody who dared visit for the recovery of alleged looted properties, like an armed robber. They, apparently, obeyed him.

The suit which was filed by Okorocha’s Counsel, Alaezi Nmezi, seeks to declare the government’s order for his arrest, illegal, unlawful, unconstitutional, and a breach of his fundamental human rights.

Listed as defendants in the suit are: The Imo State government, the Attorney General of the state, the Secretary to the IMSG, and the Chairman of the Property Recovery Committee.