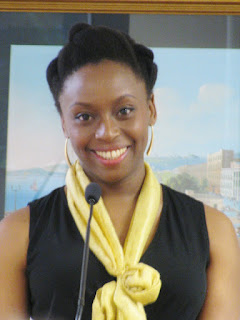 Obienyem wrote in an opinion piece, in response to attacks on Adichie for writing an article about the dispute in the Guardian newspaper entitled, ‘My Hometown Under Siege’. The primary focus of her article was ongoing sponsored harassment and intimidation of Abba community residents.

Prior to publishing Adichie’s piece, the Guardian had carried out an investigation of the dispute and the facts that Adichie laid out in her article, even despite Adichie’s local and international stature and credibility- to ensure that there was sufficient basis to publish her piece, in line with journalistic best practices. The paper published the resulting 3- page investigative report alongside Adichie’s article, with the combined four-Page write up being entitled “Special Report”.

In Obienyem’s piece, he stated: “I read what our pen export and one of the best in the world, Chimamanda Adichie, wrote about the land dispute between her town, Abba and Ukpo – both in Anambra State, Nigeria. It was the lamentation of a deeply-troubled soul over the impunity of men. Her timely piece is a necessary buffer against environing principalities eager to control or appropriate Abba.”

“Going by her stature and comfort zone, Chimamanda could have decided to remain aloof to the unjust plight of her people. But, with what she did, especially more from the urge to fight injustice than anything else, my respect for her has many times been magnified.”
He continued by writing: “I have met Chimamanda severally and on each occasion, was thrilled by her charming modesty and sense of propriety. Typical of her, she made her point clearly, and without denigrating anybody: Is justice up for sale to the highest bidder? Do we no longer have rule of law in this country? What are the actual duties of the Police — serving the nation or individuals? What wrong did she commit? All I saw was the disillusioned tenderness of a writer mourning the disorder in her country.”

Indeed, the main point of Adichie’s piece -which Obienyem highlighted- the aforementioned harassment, intimidation and disruption of family and business affairs of Abba residents, has not been denied by any of the parties concerned. To the contrary, there have been credible reports of same occurring, including video recordings and well-documented statements to the authorities.
Some objective and informed observers of unfolding events have noted that

personal attacks on Adichie, sometimes combined with the recitation of the legal history of the land dispute, appear to be the means by which those behind the attacks on Adichie have sought to distract attention from the main issue which she raised about the harassment campaign, and to throw dust in the air to hide the facts.

Obienyem carried on: “From her piece, it was obvious she did her homework and was availed of all the facts. At a stage in one’s life there are risks one would not venture into. For a person of her standing to go through books, talk to people and come up with the synthesis of views on the matter, one is convinced that she has done the right thing.”

“On the contrary, it was with great embarrassment and indeed, shame that I read the reactions of those that called themselves “Igbo Youths” to what Chimamanda wrote. I was even more upset that the reactions were brazenly published as advertisements in newspapers. Do they expect Chimamanda to condescend so low as to engage in “tru bum tru bum” with them? No way!”

“The so-called youths being used are ordinarily those that should be enjoying the calming hypnosis of a well-written piece — Chimamanda’s Lamentations and Other Works. Alas, there they were, abusing and pouring obloquies on her.”

Obienyem stated: “Clearly, the practice of exchanging people’s conscience with money has not ceased as those so-called youths have proved.”

Adichie is renowned for being extremely familiar with and knowledgeable about Igbo culture and history despite her relative youth: including of her hometown, local government area and Anambra State. Indeed, the late literary icon Chinua Achebe said of Adichie early in her career, ‘We do not usually associate wisdom with beginners, but here is a new writer endowed with the gift of ancient storytellers…Adichie came almost fully made’.

She has received various awards and commendations from successive Anambra State governments over the years, including most recently in 2016, being honoured with the Anambra State Award for Excellence by the current incumbent, His Excellency Governor Willie Obiano. She had previously been the keynote speaker at Governor Obiano’s 100-Days in Office event.

Former Anambra State Governor, and current Minister of Labour and Employment, Senator Chris Ngige had previously honoured her by gracing an event celebrating Adichie in her hometown, Abba, at the beginning of the decade.

Indeed, at the national level, the Federal Government, through the Ministry of Foreign Affairs, had previously distinguished her with the Global Ambassador Achievement Award in 2011. Adichie has also received numerous international awards, including 14 Honorary Doctorate Degrees from leading universities, including one of her alma maters, Yale University.

Obienyem in his article, discussed other issues which he considered salient, including his view of the distorting effects of misuse of wealth on the Igbo culture today, and indeed on many other cultures in the country, and how it has led directly and indirectly to this situation of serious and accomplished individuals being attacked by sponsored groups. He rounded out by saying “There must be limit to madness in this clime”.