Nigeria And The Igbo Question 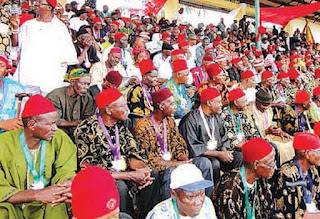 Image via This Day

The Igbo question is a network of six fundamental issues that Nigeria has failed to adequately address, and the Igbos have become the poster face of them. At the root of the Igbo problem are one, failure of the democratic principle of “rule and be ruled” in the governing of this nation; two, nature of politics that ultimately denies egalitarianism, but accents domination; three, absence of a proper definition of citizenship; four, absence of fairness and justice in every sphere of this nation; five, lack of a clear definition of the character of the autonomy and cooperation of the federating units in the republic, and six, aborted character of self-determining regional economic development, the freedom of the federating units to use their own God-given resources and talents to develop their own areas of abode without undue interference from the center.

Number One: In a democratic society all citizens have the inherent right to rule and be ruled. Every citizen or group counts. We cannot have a nation that is internally split between the part that counts and the part that does not count, the part of no-part. Igbos are part of no-part because they are a part of Nigeria, but they do not count in the part that rules. This is humiliating for them—bemoaning their treatment as a defeated people. We are approaching the 2023 presidential election and leaders of this country ought to seriously think about this anomaly. After the “June 12” debacle and we entered the 1999 election season, the leaders of the country, especially the military leaders of the north, were wise enough to work things out such that only two Yoruba candidates stood for the presidential election. The Yorubas were not regarded as part-of-no-part.

Yes, the Igbos, though one of the three giant ethnicities, have been marginalised out of Nigeria’s most important political office. But there are many other groups that have the same experience. This was why I stated earlier that the Igbo question is the whole question about Nigeria. Thus, we need to work out some power-sharing arrangements for the six geo-political regions; not by law but by convention, common consensus based on the love of country.

Number two: Deeply connected to the first issue is the political logic that counts the various groups in the country differently. When it comes to the distribution of top positions groups are counted based on differences in birth, regional origins, and religious preferences. This denies egalitarianism and promotes oppression. The Igbos feel that if they are allowed to compete and secure positions like the rest of the country, then they will excel more than where they are today. But this is also a sentiment that is widely shared by many marginalised groups in the country, even those in the north.

Number three: The nature of Nigerian citizenship has not been properly defined. Never mind what the constitution says. We still define citizenship at national, state, and local levels by the anachronistic notion of indigeneity. The Igbos say they are easily killed as “non-citizens” in other parts of the country whenever there is a disagreement, and the federal government does not think that Igbo life matters. Their rights to live peacefully in other parts of the country are often constricted. Well, other groups such as the Hausas, Fulanis, Tivs, and Ijaws also want to live in any part of the country without harassment.

Number four: The Igbos argue that there is no fairness and justice in the administration of this country. All they want is to be given a fair chance to compete, to be treated as full citizens like the rest of the country. The vexing issue is that there is hardly fairness and respect for the rule of law in any part of this country. Creating a merit-driven environment for all Igbo talents to flourish tantamount a new society for all Nigerians to actualise their potential and flourish.

Number five: The Igbos maintain that since the military came to power in the 1960s the federal center has seized much of the security, economic, and political powers of the federating units. The character of the autonomy and cooperation of the federating units in the republic have drastically changed for the worse. The federal government is too big and does not leave room for states to properly control their affairs and define their progress. The Yorubas also want more regional autonomy, like the type Awolowo had, so they can set the agenda for their endogenous economic development.

Number six: The Igbos complain that there are asymmetric patterns of distribution of economic opportunities that work against them. They insist that they are usually not favoured in the allocation of strategic federal projects. The Niger Delta minorities have the same complaint. They produce the nation’s crude oil and gas, but do not control them as the three major ethnic groups controlled their own cocoa, groundnut, and palm produce before 1967.
Is it not obvious that the Igbo question is really about Nigeria? The country has not set up an enabling environment that will permit all of its citizens to realise their own potential and promote collective human flourishing. The Igbo question is a signifier of the obstacles to the liberation of all Nigerians.

Can the Igbos champion the emancipation of all citizens? Can this ethnic group rise up as the vanguard of democratic politics to see the emancipation of Nigeria as its historic mission? Will the Igbos with a precolonial history and ethos of democratic equalitarianism work for the flourishing of all Nigerians irrespective of religion, ethnicity, or class? Where is the celebrated Igbo spirit that is fiercely against oppression and enslavement? Nigeria needs it! Fate is nudging the Igbos to an historic destiny and they need to rise up and act in this kairotic moment for the interest of all. This is how they can turn the Igbo question that is now a stumbling block to their emancipation into a corner stone for the building of a free and prosperous Nigeria.
––Professor Wariboko teaches Economic and Social Ethics at Boston University, USA

Quote
We need to work out some power-sharing arrangements for the six geo-political regions; not by law but by convention, common consensus based on the love of country