Onitsha And Aba: The Beauty Of Leadership Failure 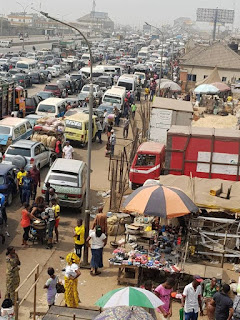 
I was at a mass at Awada Layout in Onitsha recently. As we drove through to locate the church, I wondered if it was the same Awada that dominated talks when it was developed in the 1980s (Hope I got the date right?). The sprawling estate has high-rise buildings on all streets. But there was neither paved road nor pipe-borne water. Where there were paved roads, they have given way to bumpy earth roads that would make you think your driver just dropped his learner’s badge. Almost every street was dominated by shops – a feature of almost every street in Onitsha. I left Awada that fateful Sunday wondering if Onitsha, generally, was also as chaotic and dirty. I thought to myself, that the city was not planned.

But when I took a tour of Onitsha off Google Earth and Google Maps, I was left speechless. It had always been a carefully planned city. I do not know who planned Onitsha, which has a population estimate of 7.4 million (2016 estimate: Wikipedia). But whoever he/she was, the city ought to host a memorial to his/her honour. Onitsha was a very well-planned city, with green areas and public utilities. The streets were carefully laid out. The markets were properly designated, making movement in and around the city free and easy. But that was on the map. In today’s reality, Onitsha is a dirty, unplanned and chaotic city with markets at every street corner.

The Onitsha that was host to Nigeria’s biggest brands and Igboland’s biggest businessmen and women is no more. When it was, it worked for all, becoming the Igboman’s first port of call, long before Maroko became Lekki and a desert became Dubai. I don’t know if it will ever be recovered because to correct the indiscipline that has turned Onitsha into a dungeon will be herculean. It will need the thoughtful mindlessness of a leader who will move in the bulldozers, remove illegal structures and petrol stations built in residential areas, clear the refuse heaps, restore the streets, open the drainage, roads, public utilities and rebuild public infrastructure. Like many other cities in today’s Nigeria, Onitsha begs for the touch of a visionary who will make it habitable for humans.

When I first got to Lagos, I recall encountering a lot of Customs clearing agents through my twin. Most of the containers they cleared from the ports at Apapa and Tin Can, ended up at Onitsha Main Market. A lot of Igbo guys grew to become big freight forwarders from accounts that came from Onitsha alone. That also gave rise to establishment of haulage companies by Igbo entrepreneurs. In all these, jobs were created and lots of Igbo youths were employed. Today, that glory is gone. Alaba International, ASPAMDA, Balogun, Ladipo all in Lagos, dominated by traders who ditched Onitsha, now hold the ace. There are a lot of factors that made their relocation to Lagos possible. But that should be a discourse for another day.

For now, the chaotic state of Onitsha makes life in the city nasty. A beautiful story ended abruptly. This was exemplified by the recent fire incident that razed part of Ochanja Market. Despite the narrative of lack of functional fire service stations in Onitsha, the issue of inability of available fire trucks to access the market or locate fire hydrants, are testimonies to the chaos that Onitsha now is. They are also testimonials that call for a total makeover and transformation of the city because it is now about crime, filth, indiscipline and total absence of governance.

Markets spring up at every space. Traffic lights are decorative ornaments. The streets are as dirty as they can be. Waste management is almost non-existent. But the market merchants don’t care because they feed from the rot. They impose and collect all manner of levies from every shop and remit to the state government as agreed. Despite contributing a huge chunk of the IGR of Anambra State, Onitsha lacks the governance that it needs to remain a prime city and gateway to the orient.

What you see in Onitsha is exactly what you see in Aba, Abia State. And like Onitsha, almost every business in Nigeria also had an Aba address.

The last time I visited Aba, I had to abort my trip at Osisioma Junction and return to Owerri. I was to visit Ariaria Market and it rained. The reality at Osisioma Junction made me wonder what the city itself was like. Osisioma Junction was the gateway. And it has not gotten any better. The pictures that fly out of Aba every day make one want to ask why exactly the Ngwa people campaigned, and insisted, on an Ngwa son becoming governor. Before Dr. Okezie Ikpeazu became governor, almost every Ngwa argued that Aba was an eyesore because an Ngwa had not become governor. They got one in 2015.

Today, I am told that even driving around Aba with an Abia State government-registered car could earn you stones from some residents. Aba is another sad story of failed political leadership and vision. Like Onitsha, it presents a study in how leadership failure eroded the vision of having industrial hubs in Aba and Onitsha. Those cities have become two industrial hubs of Igboland, whose potentialities were stillbirth by failed leadership. They are cities that now need focused and visionary leadership, one that would embark on demolition, reconstruction and rebuilding to return them as industrial prides. It won’t take much to do. First, it would take only focus. Second, it would take political will and stubborn fixation on correcting mistakes and restoring the master plan.

Both cities need the sort of leadership that would dislodge merchants that feed on the rot, reclaim city roads and make them passable for regular vehicular traffic and take traders off the streets and back into market stalls. But first, the markets have to be provided and also made accessible by road. Leadership must enforce building discipline and provide green spaces and parks for recreation, green areas add value to the life of a city and those of residents. The leadership must also make the people to understand and, appreciate, that not every open space must be built up. If you have to demolish illegal structures to reclaim the cities, do it. I grew up learning that petrol stations are not to be built in residential areas. Today, both petrol stations and gas plants are built at every corner and you wonder when the regulation changed.