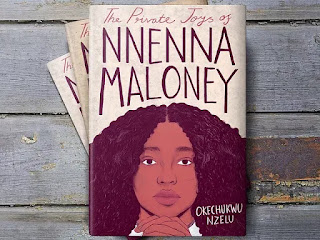 
Despite the title, this is what you might call a public novel. Okechukwu Nzelu’s debut has got a little bit of everything: young people, old people; black, white; gay, straight; comedy, poignancy. There’s some north (Manchester) and some south (Cambridge). On this wide canvas, he has created a giant game of lost and found, a vivid picture of people seeking security and identity in the maze of modern-day England.

Nnenna Maloney is the youngest of Nzelu’s characters. She’s the daughter of Maurice and Joanie, who met back in 1992, when Joanie was an “ordinary white girl” studying at Cambridge and Maurice a Nigerian graduate, clinging on to his dwindling Christian faith. By 2009, Maurice is long gone, and Nnenna, nearly 17, is asking difficult questions about her Igbo heritage. Joanie won’t discuss it, leaving Nnenna confused and isolated as she grapples with ingrained racist attitudes. Nzelu has a sharp touch for these subtle, stinging barbs: “I’m not normally attracted to girls like you,” a white boy tells her, “but …”

There are plenty of light moments, too; Nzelu has a knack for skewering absurdities. Yet there is something extraneous about the comedy. The main storyline is interspersed with scenes that, while diverting, are narrative dead ends. A peek behind the counter at the Chicken Co-op, where Nnenna works, provides some good lines – “I’ve seen things you wouldn’t put in a sausage. I’ve seen things you wouldn’t put in a Louis Theroux documentary” – but the character who says them never appears again, making the whole passage feel like an interlude in a sketch show.

The strongest writing lies in the more serious passages. Jonathan, a friend of Joanie’s, gets involved with a white man who treats him callously. We are given only Jonathan’s side of their exchanges, so that his hurt feelings resound in a sort of echo chamber. “Do you have to? Right now? Okay, that’s fine. No, don’t apologise …” This is fiction as sculpture: skilfully paring down a scene to reveal the shape of the pain hidden within.

Jonathan’s search for validation, and Nnenna’s drive to create an identity for herself, are moving and relatable stories, intimately told. However, their strength is diluted by all the sideshows: subplots and setpieces for minor characters. Nzelu has cloaked his book in a jolly jester’s outfit, but it’s at its most powerful when the jingling bells are silent.