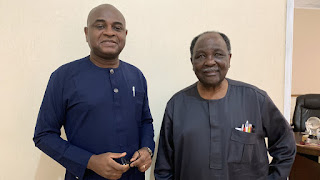 Kingsley Moghalu and Yakubu Gowon. Image: Moghalu via The Guardian.

ENUGU (THE GUARDIAN) -- Former Presidential candidate of the Young Progressive Party (YPP), Prof. Kingsley Moghalu, has clarified that he never apologised to Ndigbo or any other Nigerian for hailing former head of state, Gen. Yakubu Gowon (rtd.) in a personal message he sent to him during his birthday recently.

The former deputy governor of the Central bank of Nigeria (CBN) said that in his speech at the second Dim Chukwuemeka Odumegwu Ojukwu Memorial Lecture held at the Chukwuemeka Odumegwu Ojukwu University (COOU), Igbariam, Anambra state on Monday, he apologised to persons whose sensitivities were offended by his use of the word ‘humane’ in describing Gowon based on his personal knowledge of the general.

“My apology to the sensitivity of such persons is a very different thing from repudiating my birthday message to Gen. Gowon, which I did not do.

“Having information and a perspective from my personal relationship with Gen. Gowon, which was not available to those who reacted on the social media to my message, their misunderstanding of my birthday message as an ‘endorsement’ of the deaths of their loved ones is understandable but regrettable.

“That is why I felt an apology and further explanation on that particular point was necessary. But I did not repudiate my birthday message to Gen. Gowon.”

The Guardian had reported yesterday that the politician apologised for hailing Gowon.

Moghalu stressed that it was wrong to interpret a birthday message he sent to Gowon as “being insensitive to the deaths of our family members, young and old, during the terrible civil war.”

He added, “This was far from my intention because in my message I urged Gen. Gowon to step forward and play a leadership role in bringing the painful issue of the civil war and its lessons to closure so that Nigeria can heal. Because clearly, despite the no victor, no vanquished policy, Igbo people have remained heavily discriminated against in Nigeria in many ways, in particular in the political terrain in which there appears to be an unspoken conspiracy to prevent a person of Igbo ethnic nationality from becoming president of Nigeria.

“I am deeply sorry and apologise, to everyone whose sensitivity I offended if I mistakenly conveyed the impression that I, as an Igbo man, was uncaring about the millions of people, mostly Igbo, that perished in the war. Nothing could have been farther from the truth or my intentions.”

Moghalu, however, asked Ndigbo to put the pains of the civil war experience behind them and move on for the peace and development of the nation.
Enugu Kingsley Moghalu Lawrence Njoku Newsroom The Guardian