Return Of Ahiajoku Lecture 9 Years After 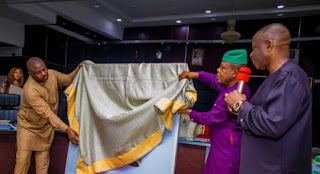 
After a nine-year lull for the exciting forum for Igbo intellectual harvest and cultural renaissance founded by the government of Sam Mbakwe in 1979 of Imo State, the Ahiajoku Lecture series is staging a comeback.

The 2019 edition is significant in many ways. For one, it marks the fortieth anniversary of the pan Igbo cultural assembly. Again, forty years after he presented the inaugural lecture, “A Matter of Identity”, the Emeritus Professor of English, M.J.C. Echeruo, will, for the second time, mount the rostrum in the Imo State capital, Owerri, on Saturday, November 30, as he headlines this year’s lecture.

He will be reflecting on the journey so far with an offering “which promises to be a brilliant and unique synthesis of the lecture series in its four decades-long journey,” informed Dr. Amanze Obi, the Director General of the Ahiajoku Institute, Owerri.

While Professor Bede Okigbo presented the 1980 lecture series on “Plants and Food in Igbo Culture”, Adiele Afigbo, in 1981, spoke on “The Age of Innocence: The Igbo and their Neighbours in Pre-colonial times”.

The Lecture Series, explained Obi, was initiated as an intellectual festival which celebrates Igbo civilisation, culture and worldview in the context of world affairs. The current Imo State Governor, Rt. Hon. Emeka Ihedioha, has taken it upon himself to revive the almost moribund lecture series as part of his intervention in culture and tourism in the state.

“Significantly, Governor Ihedioha who has undertaken the onerous task of rebuilding Imo after the years of the locust, is also seeing to the rebirth of Ahiajoku after its regrettable abandonment eight years ago. The revival of the festival is in line with the determination of the present administration in Imo state to reposition the state’s cultural and tourism subsector,” said Obi.

This year’s lecture will hold at the Ahiajoku Convention Centre, New Owerri, on Saturday, November 30th. A day before, on Friday, November 29, there will be preliminary activities that make the festival a unique whole, including the Ahiajoku colloquium, where a college of intellectuals and researchers will gather to ex-ray the leadership challenges facing Nigeria with particular reference to the Igbo nation, and a cultural night, where the rich Igbo culture and heritage will be given a fillip.

Explaining the significance of the lecture series, the DG of the Ahiajoku Institute told Daily Sun, “The series takes its roots from the goddess of Ahiajoku which, in Igbo cosmogony, relates to cultivation, fertility and harvesting.

“The Igbo belong to a dietary group normally referred to as the yam culture which extends from Ivory Coast to the eastern boundary of the Cameroon mountains. It is entrenched in the forest areas of the guinea savannah and has defined the political economy of the Igbo ever since.

“But the lecture series, strictly speaking, is not about cultivation or fertility. Rather, it is an intellectual harvest of sorts which seeks to underpin the contributions the Igbo have made and are still making to culture, civilisation and humanity.

“To underline the preeminent position of the Igbo in this regard, we must re-establish our identity as a people. This involves a dynamic interaction with our environment and our neighbours. It compels us to understand that we do not live in an isolated world. We live in a human community where our identity must be forged and made to stand shoulder to shoulder with those of other groups and civilisations,” he added.

Speaking on the Ahiajoku Instuute, which he heads, Obi said it was conceived “as an extra-ministerial department established by the Government of Imo State for the purposes of harnessing all the cultural activities of the state,” fashioned like the Goethe Institut –the German cultural association, and Instituto Italiano De Cultura –the Italian cultural institute.

“The institute,” he hinted, “when set up, will be the first of its kind in Nigeria. With it in place, Imo will become a cultural hub. Its activities and programmes will make Imo the cultural epicentre of Nigeria to which Igbos and, indeed, other Nigerians as well, as foreigners will converge periodically for epochal cultural events.”

Besides, it will take Ahiajoku out of mere talk shows and make it more celebratory. “It is envisioned that Ahiajoku will become a cultural carnival with various strands that will make it more engaging,” he echoed.

Among others, the institute will engage in cultural diplomacy by promoting the study of Igbo language and culture abroad, as well as encouraging international cultural exchanges and relations; serve as storehouse for providing information about Igbo civilisation, culture and society and will also function as a centre for the exchange of films, music, theatre and literature, etcetera.

For now, denizens of arts and culture cannot but wait with bated breath for the Ikolo to beat, once again, in the Imo State capital, Owerri, to summon the entire Igboland to the shrine of knowledge and cultural rebirth which the long awaited Ahiajoku Lecture series represents.